Oh what a week. I am trying to figure out how people that have no clue about head writers looked at this week's show. My hairstylist texted me about spoilers and wanted to know why they didn't show JaSam for "two damn days" after they got engaged! She also said that she hated the Nikolas send off. (which was rewritten to include the Greece scenes) Shannon had no idea a new writer was on--so there's that. 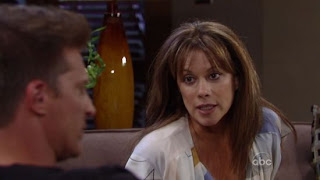 Those of us that are more privy and pay attention to such things, noticed a DRAMATIC change.I think it can be summed up in the following list of "Garin Wolf's Top Ten GH Shifts"

10. Sonny wasn't on for a whole week-- We know MB went on vacation but in the old days we would have been served up at least 3 days of inserted block taping angst about the break up. This was a nice, welcome change.

9. Helena discusses Laura's time on the island...compares Nikolas to her son and looks fabulous in python-print. Not for nothing, but Guza hasn't had Hells on in AGES let alone working with Luke and someone else we haven't seen yet.


6. Siobhan goes bat-ass'd crazy. Sure, Guza loved his Oyrish Lass...but she was a  bit of a non-issue couch potato. GW has given her some psycho. We like.

5.  Steven Mentions his grandfather, his past AND has hot sex with Olivia.

3. Scrubs Sex in the Hospital..complete with picnic...and Epiphany throwing new sheets at Patrick


2. Tracy not only GOES to Jake's...she drinks a Manhattan there. What!? (Yummy AZ scenes too!)

AND THE NUMBER ONE WOLF-SHIFT? 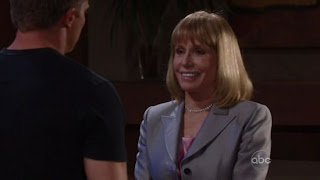 MONICA, MONICA MONICA! I half expected Adam Sandler to walk out and start singing his Harmonica song!! LOL... She was on with Tracy, Jason and Liz. Not only that she brought a photo to Jason of him riding a big wheel!! The fact that Monica never knew about Jake in his lifetime was a huge mistake on Guza's part, imo. So was killing off almost the entire Q Tribe. Perhaps Mr. W will be fixing some of that mess. 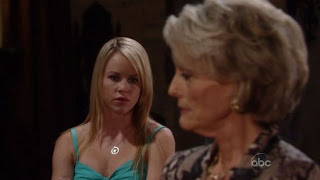 How did you like this week? Did you think/see changes? I do think one of the bigger issues is the use of more characters in one show.  History mentions like Sam's brother Danny :thud: Lucky staring at the prescription bottle. A mobster that doesn't just skulk around but is a bit fun (talking Anthony here) and seems to be involved with everything from the drug ring to Helena to Skye to ELQ.  Follow them cupcakes!!
Now, get rid of GumShoe Spinelli---it was cute for about 1.2 seconds. Now? Not so much. thanks.


Scene of the Week: I am going to have to go with the Sam/Jason/Liz scene. I really liked the tone, liked the way Liz said "It was much more than that" --and also the Sam interaction. Very nuanced and meaningful, imo

Who won "Best Smile Male"?? You won't be surprised! Vote this week for Best Smile Female--
Only on THE WUBS NET

AND if you haven't WATCHED One Life T o Live-- do it!! especially MONDAY! It's going to be epic!!

Have a great Sunday. Thanks for all the Wub here and on Twitter. (@wubsnet)
By kdmask - July 31, 2011
Email ThisBlogThis!Share to TwitterShare to FacebookShare to Pinterest
Labels: sundaysurgery