Oh boy.. OH BOY OH BOY. Do I have a lot to say this week!! If it wasn't for the Vet Scenes on Friday with Felicia, Anna, Robert et al I would have just had a blank page today!!

I hope this Sunday finds you safe and maybe just for a few moments we can forget all the crap out there and just dish on how our soap is doing. First World Problems for sure!

Not having eggs today! LOL.. just coffee I made myself.

Carly and Drew. Afterglow. UGH They do talk about hiding because of the ELQ merger/insider trading. You know Nina's going to blow her in.

Victor Is looking for Valentin and Anna. The flooding in the catacombs isn't letting anyone in there to look. Alexis talks to him next. She finds out Wyndemere went to Ava in the divorce settlement. Laura comes up to Victor and tells him that Paris called and Valentin is dead. Alexis looks shocked. Victor looks upset. Not sure if Laura knows the truth or not. Oh She does and so does Alexis.

Marty and Lucy flashbacks. He gets grabbed off the elevator.  Robert and Felicia take him to the woods and he's reunited with Lucy. Felicia and Anna hug. Valentin walks out. He says there's a small matter of "his death" to take care of. Lucy and Marty go to a bedroom. Everyone else talks about Val being "dead" and Anna still wanted by the PCPD for "shooting" Lucy.

Nina says to Ava that Carly is a bitch. Yada yada, "she'll pay". Oh she'll turn her in for sure. Nina's upset. Cries. Cries more. She has to go to Britt's memorial at GH and is so sad because she can't save Willow.

Willow and Michael. Terry tells her stem cells from the placenta can save her. Willow won't risk her daughter. :EYEROLL: Terry tells her it's safe and the best option they have. Then Carly brings in Wiley.

Willow decides to have the baby now , she's going to trust the doctors

Robert, Anna, Val plan on how to move forward with Victor. Felicia has a plan

MONDAY:
Stella is on.

By kdmask - January 27, 2023 16 comments:
Email ThisBlogThis!Share to TwitterShare to FacebookShare to Pinterest

Ned and Brook run into each other at GH. They are going to go visit Willow. Brook cries to Willow about Chase. Ned and Michael make up a little bit.

Sasha comes over to visit Nina. Sonny's trying to get her to eat. Sonya tells Nina she found out about her being Willow's mom from Willow. They talk about the bone marrow test. LAB CALLS.

At The Savoy, Selina tells Cody good job on the poker game. Mac and Felicia walk in. He said he warned Cody away from "that woman" . Felicia wonders why he cares. He says he just does. They go to talk to Cody. Fe asks if he's going to Britt's memorial tomorrow. He says probably not.

Selina sees Gladys. Gladys has to pay up. She's lost a lot of poker games. She owes $175,000!! Gladys offers up Brando's garage. Wu asks if she even owns it. Gladys is like: WELL...not really. Cody overhears them. He remembers that Sasha said her mother in law has guaridianship over her. 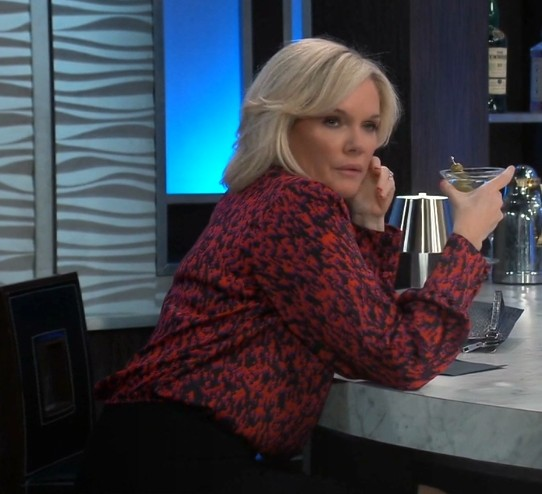 Nikolas delivers divorce papers to Ava at The Metro Court restaurant. "You knocked a girl up that's not even old enough to drink this martini" AHAHAHA.  He tries to explain things to her.

Spencer and Trina. He tells her he wants to raise his bro or sister. She doesn't think he's ready. (no shit!!) LOL he's like WHY, won't you like me anymore? They decide to take their 'friendship' public.

NINA goes into Willow's room and she tells her she's not a match. She's sorry.

By kdmask - January 26, 2023 30 comments:
Email ThisBlogThis!Share to TwitterShare to FacebookShare to Pinterest

Drew and Wiley. Olivia comes over to get Wiley for a sleep over. He goes upstairs. Drew slips and Olivia wants to know what's happening with the whole Nina/Carly/Willow stuff. OMG OLIVIA says Carly was doing it for good reasons and not being selfish THE FKKKKKKKKK??? OMG. UGH NO I give up.

Trina and Spencer go to Kelly's. Trina finds out about Joss and Cam breaking up. She's like UM WHY DIDN'T SHE TELL ME? Cam looks at them. Will he tell them? PROBS NOT because he's nice. Trina is mad at Josslyn for not telling her they broke up on NYE. Cam tells them Joss just broke up with him that's all. Leaves. Trina and Spencer talk about Britt's memorial tomorrow. She says she'll go with him.

Victor is on the phone with someone. Laura and Charlotte come into the Metro for dinner. Charlotte runs into him in the hall. She asks where her father is...

Marty is talking to Laura about bringing Victor down. Laura thinks if they do they will be doing Cyrus' bidding. He tells her he's going to represent Esme Prince. Laura's not happy.

Laura leaves, gets Charlotte--they leave Victor. They have dinner with Marty. Charlotte is afraid for her father. Laura tries to reassure her.

Lucy is found in the catacombs. She's tied to a pipe. Val and Anna try to break in. Renee wants them to use the door. They say it's guarded.  They finally pry off the fence and go to Lucy. She still thinks Anna tried to kill her. Anna says she will explain. Then Renee comes in with a gun and says no one is going anywhere. Two guards come in. They call Victor..Victor is on Speaker phone: "Enjoying the reunion"??  He says that Gavin should take Lucy and Val away and kill Anna. OH! Anna put a bomb in the catacombs and activated it and it's going to flood. She knocks Renee out and Val fights the guards. They end up swimming through the catacombs and Lucy has an oxygen thing Anna brought with them. Lucy wants to call Marty but She can't. Valentin explains that everyone needs to think they are dead.

By kdmask - January 25, 2023 27 comments:
Email ThisBlogThis!Share to TwitterShare to FacebookShare to Pinterest

Oscar NOMS!
So happy for Jamie Lee Curtis and Everything Everywhere!!

VAnna in Paris in a Monastery looking for Lucy. Renee comes in to lead them to the catacombs. She flirts with Valentin. They go into the Catacombs. Anna goes missing. Renee tries to kiss Valenin...then Anna comes walking up.

Liz and Laura talking about Liz' mom. Liz wonders if she should forgive her. boring

Nikolas called Liz' mom Caroline to "help with her daughter" and Nik made her promise not to tell Liz he asked her to come. He goes in on her for Liz' childhood and says she'd better do exactly what he says. She asks what it is. He says she should use her talents she used on Liz to erase her memory now. WHY wouldn't he just tell Victor...who has been known to implant other people's memories into each other? I mean??

Maxie and Sam are at The Savoy. Maxie is sad about Britt. They talk about the Hook. boring

Dex tells Sonny he couldn't stay away from Joss. He tells Sonny about NYE. Sonny's like WHY am I just hearing about this now? Dex does tell him Joss went back to his apartment. He says she was only there for a couple of hours, then they went to Kelly's to meet Carly. Sonny: CARLY KNEW??  Dex doesn't tell him the whole truth for sure.

Joss tells Cam not to tell anyone about her and Dex because of what Sonny might do. (but Dex already told him ahhahahaha) Joss says that Cam wouldn't hurt someone else on purpose. He says maybe you don't know me so well. OH! He reads her big time!! Says he's not going to 'save" her boyfriend AND he hopes Dex cheats on her someday. He also says that they are in NO WAY friends.  He finally says he won't tell anyone because he's a better person than she is..

END:
They find Lucy in the Catacombs tied up

By kdmask - January 24, 2023 20 comments:
Email ThisBlogThis!Share to TwitterShare to FacebookShare to Pinterest

Sante--oh the PH is redone. I wish they had moved to Lulu's house. They are talking about trying to find Esme's real parents.

Spencer is looking for a house because he wants custody of the baby. Sonny's trying to talk to him about it.  Sonny thinks he's a little batty for thinking he can take care of a baby. Sonny says he has to be there for it all the time. (Sonny's learned a lot over the years). Spencer wants to save the baby from his father and being betrayed like he was.

Laura is at Wyndemere. Spencer tells her that Ava gets Spoon Island. Laura doesn't understand why. Then Nikolas tells her he's suing for full custody of the baby. She says don't keep that baby from it's mother. Not a good idea.

Esme is getting harrassed at Spa Jail by some lady. Heather comes by and tells Ramona to leave her alone. Esme is grateful. Heather and Esme talk about motherhood. Yada yada.

Ava recognizes Mason from the Qs party when she was attacked. He says it wasn't him. She thinks the police should interview him. He leaves. Oh this is an Ava/Austin chem test for sure. Twitter calls them JOLT for Jerome Holt. Oh I think Olivia Jerome might be his boss and Ava is the connection! 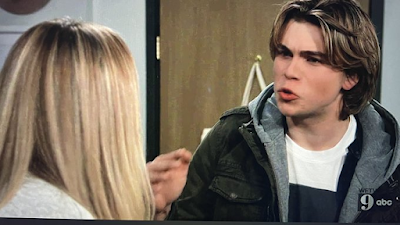 Cam..."Is he the reason you left me"?? Then he goes in and they all are upset. Yada yada. Dex walks out and then Cameron asks Joss if she slept with Dex before they broke up. She says yes and tells him about NYE and the Hook.

Liz' Mom is in town for a 'consult" OMG she's going to be doing Memory erasing for Victor!! WOO HOO! They talk about the lady dying that Liz pushed down the stairs. Liz wants to know why she stayed with her dad. Mom: I LOVE HIM Liz: MORE than you LOVE ME? They talk. She's staying at the Metro.

Dex shows up at Sonny's. Spencer tells him to leave because they are having a family discussion. Dex waits in the hall.

Sam talks to Esme about finding her birth father/mother. She asks about Maggie Fitzgerald

Dante asks when Heather what her info is on Ryan/Esme. She doesn't have much.

Joss asks Cam not to tell anyone about her and Dex.

Heather finds out that Esme had a nanny that might know who her father is. UT OH

By kdmask - January 23, 2023 22 comments:
Email ThisBlogThis!Share to TwitterShare to FacebookShare to Pinterest

Sunday Surgery: You Cant Always Get... 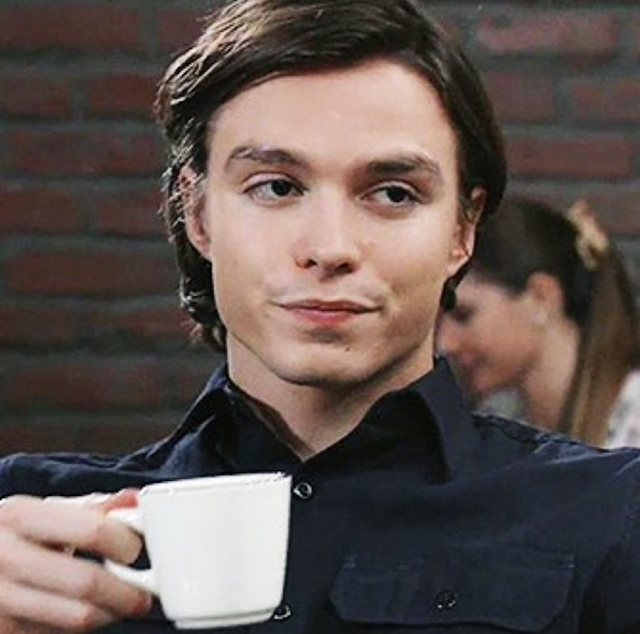 Well, not all weeks can be my favorite now can they?? Yes, there was plenty of drama but there was a lot of "stuff" that just felt like fluff and filler. Do I know they need filler? Yes. Am I still going to complain about it? Um...YES. LOL

The week was uneven but did pack a punch. Let's get into it!!

You know the only reason I chose that photo is my face looks like this frequently. In ANY situation.