In yet another twisty turn, seems no one told Mr. Franco that "Franco" is coming back to mess with Jason Morgan around the time of his wedding. WHOOPS. 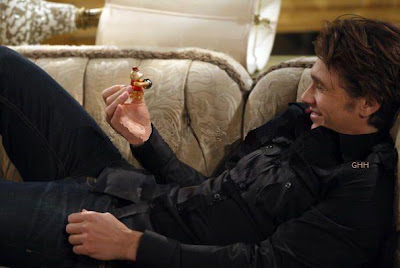 LOS ANGELES, Calif. --
James Franco is scheduled to return to “General Hospital,” but exactly when appears to be up in the air.
Earlier this week, it was reported that James would return to the ABC soap on September 20. However, when Access Hollywood caught up with James at the “Rise of the Planet Apes” premiere in Hollywood on Thursday night — his return date was news to him.
“I will be back to ‘General Hospital,’ but I’m filming a movie about the Wizard of Oz in Detroit right now, I haven’t filmed any new episodes for ‘General Hospital,’” James told Access.
“I don’t know if they like think I’m going to fly out on a weekend and shoot something, but I don’t see it fitting into my schedule anytime soon,” the actor continued. “I’ll go back, but they said like September 20 or something I have no idea what they’re talking about.”
Adding, “I don’t know when I’m going back.”
By kdmask - July 29, 2011
Email ThisBlogThis!Share to TwitterShare to FacebookShare to Pinterest
Labels: franco, fronkey