A Part To Die For: Franco Frenia

From The Ultimate Fort Bend: 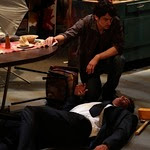 In the story arc that begins next week, Franco reprises his role as an eccentric killer who is also named Franco. Garfield, 46, plays a model that Franco photographs in his studio.

"He's starting to take pictures of me in his crazy studio, in a dead position," Garfield said. "So I am his model-slash-body that he ultimately kills... he and I have a little confrontation, needless to say."

Garfield, best-known locally for his KPRC radio show The High-Tech Texan Show With Mark Garfield, flew to Hollywood last month to work an 11-hour shoot.
Is he imagining Stone Cold laying there?? BTW, anytime they need a dead body on GH, I'm available!!!
By kdmask - September 14, 2011
Email ThisBlogThis!Share to TwitterShare to FacebookShare to Pinterest
Labels: franco