AMC: went out with a bang-- you could hear the collective sadness all over the internet, airwaves and blogs.  I still don't know what ABC is thinking-- it's almost like they want to shoot themselves in the foot. Or blow up all of daytime. It's all a business, we know that.  Thing is, commercials will be run no matter what stuff is put on during the AMC timeslot. The cheaper they make the program, the better off they are.  Loyalty be damned.  All we can do now, is NOT watch ABC daytime other than our soaps and then watch them if/when they go online. In other words, "screw" that new show!

General Hospital this week... was at times romantic, weird, heartwarming and it smelled a little like Chinese Food. Of course, we couldn't get out of the week without someone getting plugged--this time Dante had the honor. Johnny is running around with a gun and his batty old man is right behind him.  Franco's off in his studio with spider-cameras and dead models. Wait until you see Monday's show--know I am squeeling from here!!

JaSam's wedding was a bit like Jim and Pam's from The Office--private setting and then a nice reception. Good to see Monica and Edward there, but where were Max and Milo?? The shoe-exchange was cute and Maxie's distress fun. (did Franco steal the real bridesmaid's dresses to wear them himself!!?). Patrick forced himself to go and have a good time-- and we got a bit of Robin and Jason back story. AND of course Steve Burton in a white robe drove everyone nuts! LOL
There was plenty of Sonny angst to go around. Finally Kate decides to break her ice-panties, put on a green dress and show up at the party. Maybe we are supposed to  be grateful??
The whole Wyndemere thing was a bit interesting. I know Helena's up soon-- and driving people crazy with whatever she can get away with.  I believe the "Lady In White" will be a Siobhan double unless they can get Genie back. LOL...it can be a switcheroo at the last minute?? Lucky will be off to Ireland soon, watch for clues. Ethan will be in the middle of it all too.  I have more coming in on this story but I'm not sure what to believe yet.
Of course it had to all end with a GUNSHOT because GH can't do weddings without something. *sigh* I really had hoped GW had changed all that. Franco at the end would have been enough--but the shooting? sooooooooooo over done!! 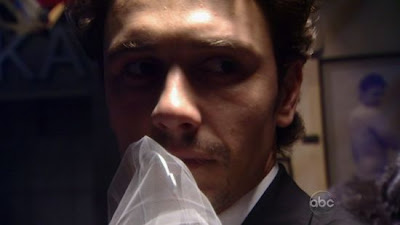 Scene of the Week: Franco dancing with Sam's dress, the monkeys and smelling the veil. Heh,  come on, brilliant yet bizarre. Just what I like. Sorry, JaSam fans, it made me have more fun than even the vows. 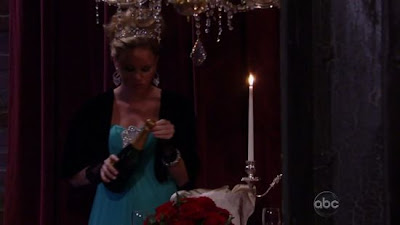 NOT the Scene of the Week: Ok, now...I realize this is supposed to be romantic but it just... well, not a great choice of wardrobe or set up. It shouldn't have made me LOL 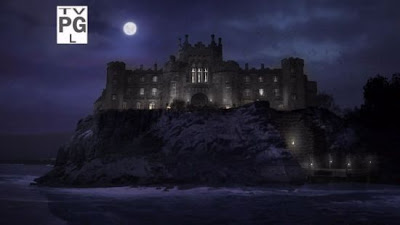 As much as I like Wyndemere, this looks like Eddie Murphy's "Haunted Mansion" poster.
And not a very good one! 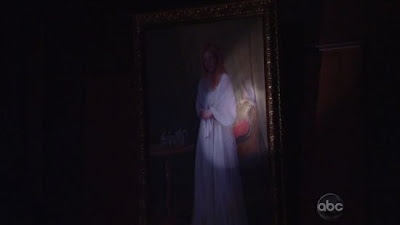 Who remembers the Laura portrait  that Stefan slashed so long ago??
See who won the 3-way on The Wubs Net.  Are you still enjoying the Soapy Death Matches?? Let me know...Have a great Sunday, thanks for all your support!
REMEMBER: "Dirty Soap" will be on tonight E! 10pm with Kelly and Kirsten

By kdmask - September 25, 2011
Email ThisBlogThis!Share to TwitterShare to FacebookShare to Pinterest
Labels: sundaysurgery