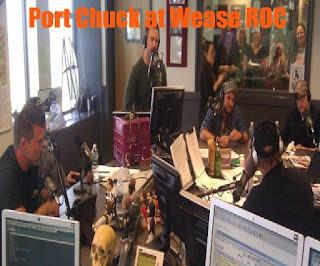 PORT Chuck at Brother Wease Studio
Looks like I'm going to the cocktail hour before the Port Chuck show. I didn't get tickets-- but the fans are having a get together before hand (I love the fans just as much as the actors LOL). So I won't be here for the soap today  Please recap Sonya!! xxo Will I have to pay you soon? 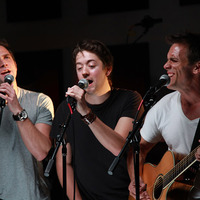 The interview this am with the boys was great. Our local DJ Brother Wease just really couldn't get over the ticket mania that they inspired. He was asked for tickets more for them than any other gig in town in 27 years. He's a huge rocker so that's something. Callers  mostly said "thank you for coming to Rochester" and how gorgeous Steve Burton is. One asked Bradford if he did some of the "Spinelli Speak" writing and he said sometimes. They all found out GH was filmed here with Luke/Laura in the '90's when the producer of the location shoot called in. They were here 10 days and Port Charles IS Rochester!! They jumped in the Irondequoit Pool at the Country Club in the helicopter scene!!


Steve talked about working in various mediums but how he liked the stability of GH the best. He's been there 20years now. Scott Reeves couldn't talk due to vocal rest and snapped his fingers. By the way, it's Reeves who has all the musical connections that got the band their start. It was Burton's idea, but Scott's know how that got them off the ground.

Brandon Barash talked about the MDA telethon and said that Port Chuck was going to Vegas next for Sunday's show. They'll be on between 10-12pm, not sure the exact time. Wease also googled Brandon's girlfriend (Colby, AMC) and about died on her gorgeousness!

I was surprised how Bradford sounded on the show... he has a great radio voice and sounds nothing like EITHER Spinelli. 1940's or the other one!! His voice sounded the best, imo. Wease is now going to watch GH.. I was waiting for a Franco mention (he's a huge film buff) but nothing. I should have called in to clue the station in on Franco's Jason LOVE.

One girl wants to take "Stone Cold" to the "Stone Cold Creamery" while he's here! heh. Supposedly, they'll be back in Jan or first of the year.. we'll see. They have a lot of fans in the area, and people that drove from all over because soap stars never come this way.

The show is sold out...can't get tickets no how, no way ... I personally have trouble with the $250 meet/greet... and am surprised the "standing" ones went as well. (they have a 4 tier pricing system). Oh well, if they can make it, why not!!? If you are there, let us know!!

By kdmask - September 01, 2011
Email ThisBlogThis!Share to TwitterShare to FacebookShare to Pinterest
Labels: portchuck