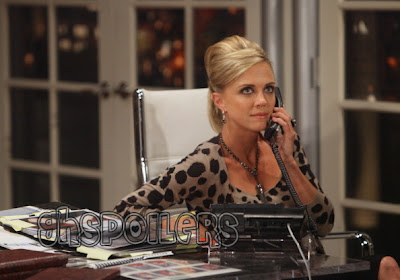 NuKate...with her snooki goin'
WELL, did you see the spoiler pics up on the Wubs Net?? And all the good info?? Looks like Sonny asks Kate to the JaSam wedding. Not sure how I feel about THAT one. I will reserve judgement until I see the newbie in action. I did like Megan Ward though.

OLTL: Little SAM is so damn cute!!! I love him.  I could give him /r/ therapy. Jess and Christian? Left field?? Uh, yeah!!
TEA was on fire!! "At least he (Victor) wasn't a sex offender" WOW...lol.
Shane goes to say "sorry" to Jack but really it's to DIG at him about killing his mom...
just a side note: I HATE Blair's tight white leggings. ewwwwwww.

GENERAL HOSPITAL: Here we go-go!! Will it make me fall asleep today?? Hmmmmmmm

Sam and Krissy doing wedding stuff..cute. Krissy has a bone fragment. You know she's going to end up in a wheelchair at some point. We have to have someone blind or wheelchair bound.  You know it. LOL I thought the bone thing was due to the CAR BOMB or the Bus Accident but Alexis says it was Keifer. Hmm.

Alexis had her bat-wing shirt on, I can only hope Helena's behind that corner.

Michael quit ELQ! Why have him quit when he was just changing?? UH... WOLF you are supposed to be getting out of the mobular sheeze!  Michael is going to work at the WAREHOUSE? Didn't he get SHOT in a warehouse?? ahahaahha!! That's so stupid. Whatever. They are trying to make him SO tough and all I did was giggle at him.

The new Gina person will be coming..and rumor has it AZ "Dies" or maybe doesn't die. Whatever. Maybe he'll fake his death.  Never seen THAT before.  *sigh*

Jason said SONNY WAS WRONG today about Jax!! WOW..World shall end soon. I think some Jason Q is peeking thru!

line of the week: Maxie: "Brenda was a huge Fashion Disappointment" ahahahahha!! She was! She was!

Everyone looked VERY orange on my screen today!! How about yours??
By kdmask - September 07, 2011
Email ThisBlogThis!Share to TwitterShare to FacebookShare to Pinterest