Struck me today, watching GH that other than Tracy--not a lot has changed! LOL.. looking at the spoilers, I know they haven't. You can actually subsitute JaSam's Wedding for Brenda and Sonny's!! I can't believe who's getting shot again, *yawn* 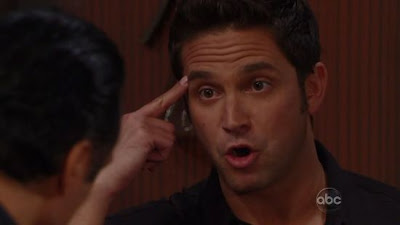 How long do I have to wait until I can declare GW as boring as Guza? I'm still waiting!! Hells is coming so at least that's something I can look forward to. Franco, Luke... ok, I'll hang in there!


Tracy and Lulu...I'm so glad there's that relationship. Thank you!! Tracy says:  "Lulu...get over yourself"!! ahahaha. Lulu actually needed a slap...yep. I said it. Jane Elliot is such a great actress. Both of them crying at the end so nice.


I can't believe Lucky was STILL  in that damn bathroom!!  He was in there forever.

Spinelli ...Good gravy. LOL...and the Bakery clues coming together for him and Lucky about at the same time. While Maxie is in the dumpster.  She found the ring in all that? WOW... maybe she's a diamond-finder like those other people can find water.

Olivia with a giant gun. heh... Guns Guns Guns.  Stupid Sonny...instead of everyone yelling at him, make him take those meds!
I actually giggled a bit watching Olivia holding that giant ass'd piece on Sonny. I still say she'd make a good mobular wife.  And...yep,  I kinda wished she and Johnny had had sex after that!!!
I volunteer to redecorate Johnny's nasty apartment. Man, it's as bad as The Metro Court.

Those showers are getting some workout in that Hospital, eh?? They are always so empty! They are the new storage closet.  And I'd think not too sanitary. ewwwwww.


If you get a chance, hit a sponsor on the site or over to the right on here ----------> still looking for a job over here. Seem to be Few and Far between.  You're my only hope, wubbahs!
By kdmask - September 13, 2011
Email ThisBlogThis!Share to TwitterShare to FacebookShare to Pinterest