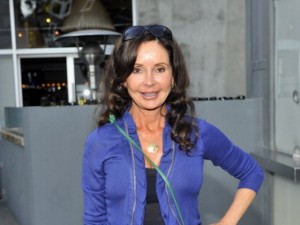 Jackie stars as Sophia Madison on a new web series called "The Bay." She's off contract with "GH," but still a recurring character.
"I hope they always leave the door open," she says. "They changed head writers a few weeks ago. I'd be happy to come back."
She does keep in touch with her TV brother Luke Spencer a.k.a. actor Anthony Geary. "Tony is as much a brother to me as if he were my blood brother," she muses. "I've known him for over 30 years and spent more time with him than my real life brother."
"I was with Tony for 12 years," she says. "I love how he has managed to sustain in this business. When he's not working, he lives in Amsterdam and has a great life."
Jackie is working hard on her own great life.
"Life brings all sorts of unexpected challenges and transitions. Change isn't always welcome, but it is an opportunity to grow," she says. "You have to ask yourself: Where do I go from here
"You have to constantly rewrite the story," she says.
Jackie can also be seen in Rick Springfield's documentary film "An Affair of the Heart" .
By kdmask - September 21, 2011
Email ThisBlogThis!Share to TwitterShare to FacebookShare to Pinterest
Labels: jackiezeman