Sunday Surgery: Get Out The Gowns! 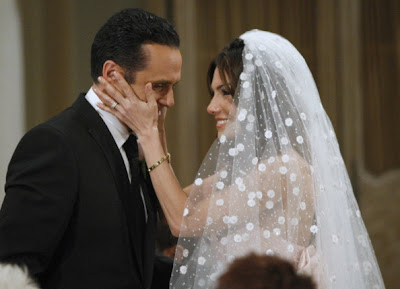 There it is...the SnB moment you've all been waiting for!
Today I thought I'd write about something fluffy and light...with the rape revelation last week and the heavy scenes, I know most blogs will be waxing poetic about Chad Duell and his performance. I've already done that--with heavy Kudos to Steve Burton and Laura Wright as well. Today is a day of Fun! Of "Say Yes To the Dress'!! 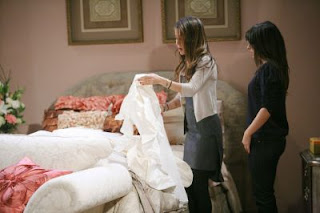 So, what did Brenda choose as her next dress--she's had two already from the past. Her newest one got shredded by someone lurking in Jason's penthouse.  They want us to think it's Carly...but that's just WAY too obvious...isn't it?
I've got the goods!!! This dress is an Oscar de la Renta in a pale dusty-pink.  Word is it cost a bundle!! The veil is also interesting as you can see from the photo. The bridesmaid's dresses are a light mocha with light pink sashes. The altar flowers are white tulips. Speculation is the dress is this Oscar number. 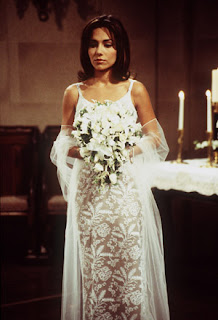 This was not one of my fave looks for Brenda... This look was the one she wore when Sonny left her at the altar. I personally think it was a bit nightgownish.  For all Brenda's Wedding dresses go to the fabulous Sonny and Brenda Wedding Countdown.
Yes, a bit of a departure from my usual groan/bitch Sunday Surgery. I guess because I'm a sap for a decent wedding, few that we ever get on GH.  I think I'm in heaven with Tracy and Luke's so close to this one!!
My FAVE Scene of the Week: I have to pick the one where Carly is overhearing  Robin and Brenda are trashing her.  Laura Wright's face was perfect. Tough Carly, still bothered by the barbs that were thrown by the girlies. Almost felt like Jr. High and being in the stall when someone is talking about  you. I liked it because it was honest, and featured some girl interaction.
Oprah will feature Soap Opera Legends on Feb. 9th. Look for GH's Luke and Laura to be featured!
By kdmask - February 06, 2011
Email ThisBlogThis!Share to TwitterShare to FacebookShare to Pinterest
Labels: sundaysurgery