Stockard Channing and Stacey Keach are appearing in Jon Baitz's "Other Desert Cities" at the Lincoln Center in Washington, DC. 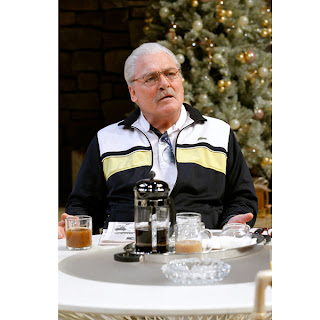 "It would have been Ronald Reagan’s 100th birthday on February 6th, 2011, which seems the right timing for Lincoln Center’s extraordinarily well-acted production of Jon Robin Baitz’s “Other Desert Cities,” a new play with a script that would itself be extraordinary if it were not for the bizarre, almost self-parodying twist of the final 15 minutes."

The Wyeths are said to be modeled after John Gavin, an actor turned politician (Reagan’s ambassador to Mexico) and Gavin’s wife, actress Constance Towers. John Gavin was friends with Ronald Reagan; his wife is friends with Nancy.

The play makes up a Hollywood-political family which is a blend of the Regans and their children as seen through the author's eyes.
Read the full UCLA write up. The play runs through Feb 27th at the Lincoln Center.
By kdmask - February 07, 2011
Email ThisBlogThis!Share to TwitterShare to FacebookShare to Pinterest