Here we are, another Friday under our belts!! This week seemed SO LONG when watching  GH.  Goodness. Yesterday was a chore. Today? Well...you tell  me.
NEW SPOILERS are up!! Some wedding things are coming in...I'll  be getting more all weekend I hope. Sonny's missing his wedding ring...what else can go wrong??! 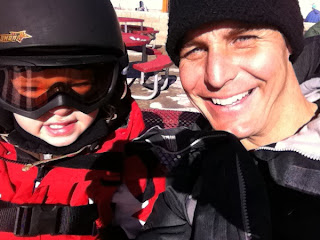 Ingo and his son Peanut, skiing the other day. He tweeted this out to the GH fans!!


TODAY'S SHOWS:
AMC...who lets a lady in a hospital gown out in the middle of nowhere in the snow?? Some stupid cab driver, there.Loved Colby being handcuffed. heh ambulance: SUCH A CLIFFHANGER!
OLTL: A DOUBLE WEDDING soaptastical day!! woot!! Loved Vamal and Rama in their Indian Finery!! Such a fine, wonderful drama for a Friday!! Marty remembering and Clint being all nasty. Delish!! Clint was just nasty!!  baby reveal: SUCH A CLIFFHANGER!

GH: Carly tells Sonny. Sonny wants to kill Carter but Jason already did it!! Save those bullets!! Carly..you need to start looking around instead of blaming Dante. Judge HAYSEED for one. He sentenced Michael. And covering up the crime is a huge one. Whatever. And doesn't Carly have to bitch about Brenda right before leaving!! This should have been about Michael. ugh.
Liked that Brenda brought back wedding cake samples. I like that stuff.

THEN Carly's skulking around the PH..and overhears Robin/Brenda. SINGLE BEST scene was Robin and Brenda trashing Carly while she listened.


The Haunted Star-- I really need them to stop showing it in February.
LUKE'S BACK!! Mac arrests Tracy for the diamonds...like he wouldn't know Luke did it instead? Uh...d'oh.


Lucky arrests Siobhan. Such a great plan, too bad The Balkan walked right in. Heh. Siobhan is smuggled out and then remembers that she HEARD bells of a certain Ferry in the phone call from her sister Megan. BUT she can't tell that the BALKAN is Theo. A guy she's talked to a billion times. :throwing up hands:


Maxie is turning into Amy Vining!! LOL... all she does is sit  at Jake's and talk to other people.

FUN TWEETS:
Ingo wrote: @sebroche u r a very ugly man. And I can smell ur breath from here. Maybe we can to lunch today 1230 ish.

@whitewatercrew (Kim McCollough) In other news, I turned into a boy today and got a 55inch TV.

@carolynhennesy: Going to film the Miller Lite commercial today!
By kdmask - February 04, 2011
Email ThisBlogThis!Share to TwitterShare to FacebookShare to Pinterest