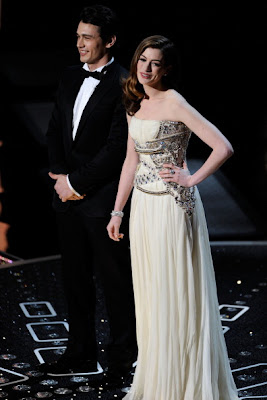 "That guy from General Hospital" Said Morgan Freeman! woot! Nice shout out to US!! I thought poor James was a bit nervous to start with--stiff almost. Some said  high! LOL, I ALWAYS think he looks a bit lit.

I really liked the opening with the movies and Alec Baldwin.  Back to the Future!! 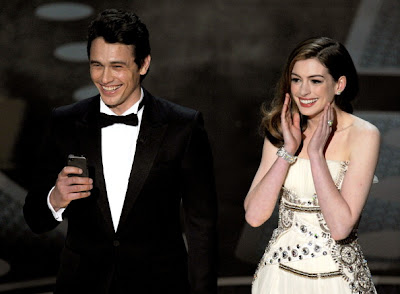 James: Thank YOU to Port Charles for watching....Watch HERE!
I thought Social Network should have won best screenplay...it was just the best there was, imo. 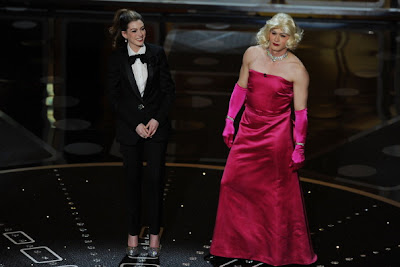 I'd pay huge money to see Franco come on GH like this!! LOL
Anne Sweeny was on...many of you emailed her about Becky!! She is head of ABC...
I am so happy Trent Reznor won best score. That score for TSN made the MOVIE!! It was so good!!
Oprah looked amazing in that dress. Wow...good to see her, she's an awesome speaker. Everyone just stopped and watched her.. I'd say best dressed to a presenter!! YOU WIN AN OSCAR! AND YOU WIN AN OSCAR!!
I was so happy to see Billy Crystal.
Natalie Portman is a starlet that totally kept her nose clean, went to school and is so respected. GOOD For her!!!  There are many of her generation who didn't.
Colin Firth's win was good.  That movie means a lot to me because of the speech pathology nod. He did a great job with his stuttering. It's not easy to replicate. I thought that James Franco's clip  fir 127 hours was really moving.
Boy, they were boring this year, more than usual imo. My fave parts were: Morgan Freeman mentioning GH, James Franco as Marilyn, The Modern Family shout out and SANDY BULLOCK mentioning General Hospital!!
Well, it was a strange Oscars --not sure if Franco meant to be that spacey--but he was.  Maybe he was trying to play a "Straight Man"?? His commercials were way better.
See you at 3 for GH! THANK YOU to all the Twubbers that were on Twitter last night! We had #GHOscars just humming away! Lots of fun...
By kdmask - February 28, 2011
Email ThisBlogThis!Share to TwitterShare to FacebookShare to Pinterest
Labels: franco, Oscars