Kinda like the  "After-Party". Now that the Ball is over, Lulu's home--Stavvy's on ice, we are left with...
Well..
Baby Bellies, 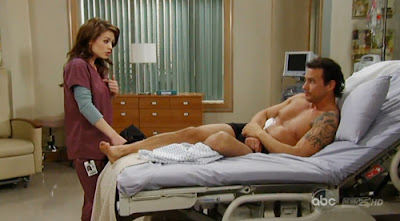 so, saddle up and get your relish forks at the ready!!


It's hard to say what's more difficult. Accepting a recast when someone has played the role for so long OR
having the character come back --remembering nothing.
The angst is lost.  Not sure this was the right move. Having Lulu not know anyone loses it's impact big time because she isn't the same person. Ergo, her 'reactions' and others 'reactions' just fall flat.
The whole Milo thing?
Ummmm,  interesting.  Again, don't care much. Emme is a good actress but the transference of the essence of "Lulu" isn't happening.


HEY! TYLER CHRISTOPHER got in shape again!! CAN YOU TELL? CAN YOU? If not, we'll just parade him in his black briefs for DAYS!! Not that I'm complaining--I mean he DOES look fine but the blatant use of his skin was..well,  blatant.  LOL NO hospital gowns available?  Then  again, it was total "Ford OLTL" if you know what I mean.


Ellie and the BELLY... that's what I'm calling it. Yada Yada. Whatever. I've watched soaps long enough to know that Maxie won't be able to give the baby up, or if she does she'll regret it forever and eventually the Spin is the Daddy will come out.  Lulu herself will either get pregnant or Britt will die in childbirth, leaving a baby-- for someone to adopt or care for. Sabrina and Patrick? Hmmm... Will Dante fall for Maxie in this Lulu-fest? Will Lulu and Dante find their way back? What about Robin? Will she walk in just as Sabrina and Paddy are going to make it official ala Tina and Cord? I could go on and on.
Do we even really CARE about Britt and her bambina/o? I'm sayin' no.

The Relish.
UGHHHHH for godsakes.... it's kinda stupid now.  No one in their right mind would split the market on a product. let alone a damn condiment. I guess I'm ok with Tracy being on more but that's about it.  They even have Shaun/Shawn/Sean doing some weird Anaconda sheeze in there SCENE OF THE WEEK: Ok, I liked this. Tracy and Nik do have a past and I really am glad they talked about her history with Lulu as well.  I could get behind some Prince Pickle. "Pickle of Prince"? 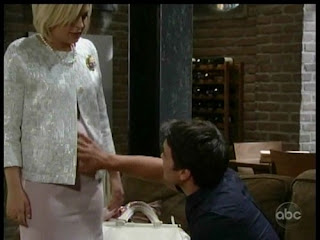 OUTFIT of the WEEK: Maxie looking like Babs Bush, by way of Jackie O. It was weird but I found it strangely adorable. I want that jacket. Well, not THAT jacket. We all know it wouldn't fit me LOL 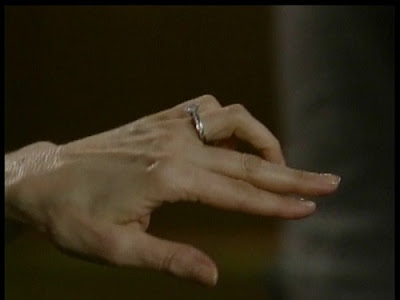 PROP OF THE WEEK: Peanut-Ring. It fell into the peanuts, survived the night (no one threw them out) and Flea took it. Oh well-- glad no one had allergies! 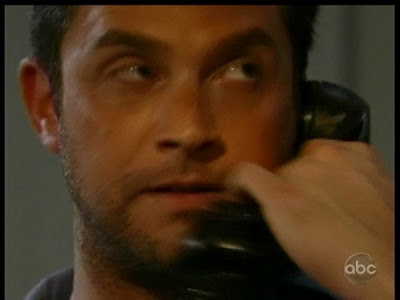 I will miss Brandon Barash.. he was a great addition to GH and one hell of an actor.

This week felt like "GH LITE" to me.  I think we'll be getting some island flashbacks from Lulu-- and of course, the "gang of 3" back from OLTL. I'm assuming Sam's Daddy story. Morgan's coming. Molly's going to the prom!
I'll have some new scoops up later today so get over to  The WUBS NET


By kdmask - April 28, 2013
Email ThisBlogThis!Share to TwitterShare to FacebookShare to Pinterest