A pathogen (Greek: πάθος pathos “suffering, passion” and γενής genēs “producer of”) or infectious agent (colloquially known as a germ) is a microorganism—in the widest sense, such as a virus, bacterium, prion, or fungus—that causes disease in its host. The host may be an animal (including humans), a plant, or even another microorganism.[1][2]

Let's get this over with first. I have to say I am really interested in all the names soap writers give for medical crisis on our shows.  We've had:

A Virus (Luke and Kong storyline)
A Toxin (Toxic Ball storyline)
and now a "Pathogen"... I don't know about you but it just cracks me up. I'm waiting for the "Amoeba strain degenerational macarobiocular SARS"  next.  Of course each character HAS to say that word 66 times an episode. That's just how it's done.
Ok, now that I have that out of my system here we go on to LAST WEEK'S SHOW! Scrub up with EXTRA scrubbie because it was quite a ride!!


SO! The big reveal on Monday left many people happy...some ecstatic and some well, wondering who the hell that was. For those of us watching the show from the '80s it made some good fun sense to have ol' Duke pop up. He is mobular after all, is connected to tons of PC people and is still  handsome as hell. My mother knows who he is.  My younger friends? Clueless.
It's a big gamble for Cartini, imo.  Bringing GH back pre 1990s is difficult because the show has NOT honored history in any way shape or form.  Guza killed off and made families vanish before our very eyes. Trying to reconstruct it all is going to be quite the task. Unlike AMC or OLTL many viewers just forgot or never knew the past people of Port Charles. I think Duke will lead to another baddie and I'm hoping he's really protecting Robin in some weird way and not some evil nut.

For now, Duke is a moot point because he's not back on canvas for awhile. So,  we focus on the PATHOGEN that was in the water. Jerry Jacks. Oh that Jerry Jacks. I'm glad he's back because I do love Sebastian Roche (a real "actor's actor) and it got Ingo back as well. I have really missed Ingo and think he's just a big a part of GH as Burton or Benard. So I'm happy. Plus I love Laura Wright with him. He makes Carly tolerable, imo.  SO yeah!! The story? Lord Help Us.

You know I thought this week was pretty funny. I love how soaps try to do medical crisis. Other towns people get sick first. And having them fill up the hallways in gold blankets? hee hee. The CDC never shows up and Patrick, a surgeon is in charge of finding the cure. BUT! Ok, those are details.  (I still think there are enough medical shows out there to see how it's done in primetime-- wouldn't cost much more). 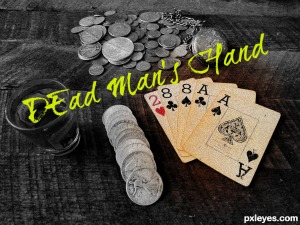 Jerry's motives are revealed: Dead Man's Hand.  Now, the Ewan factor is brought in and we get HIS back story. (Which has changed considerably since his Helena/Cassandra days but who's counting?)  In a nutshell: John Jacks (Jerry/Jax father) won the "Dead Man's Hand" from Ewan's dad in a card game  (Ewan thought he cheated) and Ewan's families luck went south while the Jack's soared. "The Dead  Man's Hand" by the way is the actual, real card hand Bill Hitchcock died with when he was shot in the Wild West.
Yes, the Wild West.
Any hoo,  Ewan was bent on revenge because he thought John Jacks essentially destroyed his father and after medical school  started treating him in Alaska for depression. ( this is a bit fuzzy but bear with me) Then, I don't know but John moved to AZ and Jane called Ewan to treat him again, and when John was in the hospital Ewan killed him with an injection.  Jerry (Who had his new face so Jax couldn't recognize him) saw Ewan injecting his father  and blackmailed him for the rest of his life and used him to do evil deeds in the medical arena. Like  totally faking Robin's burning death.

NOW Jerry wants PC to gather money that equals up to the "Dead Man's Hand" and give it to Charity. Only, it's probably not his only motive.
Next up: The Sam connection. See, Sam was involved with stealing that 'Dead Man's Hand" and it's what brought her to Port Charles-- and start her story with Jax (2003). AJ Quatermaine was involved. Surfers were involed. yada yada. At the end of that arc, she "gave the hand away" to a homeless man who was really Luke Spencer. Later, he told both Jax and Sam he framed the hand and put it in the Haunted Star. (I don't know if this is going to play out though, it's not been mentioned yet.)
*** GO TO Soap Central to read Sam McCall's Character history (Scroll down a bit) It has it all. Including the AJ Quartermaine connection and FULL Dead Man's Hand story. It's LONG.

PLEASE give me some slack on all this because although I've researched it some, I'm sure my facts aren't 100%. I tried to keep it brief. Thanks! If you know more, put it in the comments!!

GOT IT?? Well. I'm still spinning. I guess the "Magic Hand" is pretty confusing and relies deeply on your knowledge of GH's past. Some people LOVE this--a lot of people aren't going to take the time to figure it out and give up. 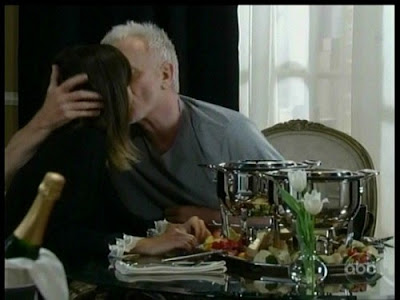 NEXT: Anna and Luke. Luke tells Anna the truth about Ethan and Robert after they make sweet, sweet love, have fondue and talk about a future. Oh Luke, couldn't you have waited a bit? LOL. Anna's pissed, Luke wants to go find Robert to tell him the truth. No one has bothered checking in with  Port Charles where people are sweating up a storm. 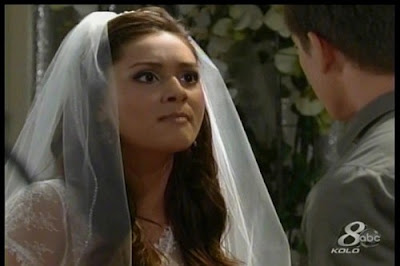 The  Junior Mints. EYEROLL. Oh please kill me know. The damn Vegas stuff? ahahahaa. So painful to watch. Did like those groovy chain curtains in Starr and Michael's room though. This just needs to go away. The whole reality show thing bombed. I would have liked to have Krissy come  back from Yale, Trey follow her and be in love with her--and then be torn apart by their fathers. That may (and I say that with a grain of salt) have worked.

Other stuff that happened this week: The Mayor showed up and put McBain in charge of the PCPD. Molly and TJ made "Bucket Lists" that included "Making LOVE".. (ahaaa) Shawn went and kissed Alexis on the mouth.  Todd visited Jerry in jail... and other stuff that didn't make an imprint in my brain.

SCENE OF THE WEEK: I have to give it to the Duke Reveal. I was dying and on the edge of my seat. I wasn't 100% sure who it was so I was giddy. That's what a soap is supposed to do.  Infuse that with Anna finding that mystery lady (who I also thought might turn out to be someone) and I was exhausted. LOL.

NOT THE SCENE OF THE WEEK: Kristina/Trey/Michael/Starr thing about his father being mob. Bad dialog, bad acting and just a plain buzz kill for the rest of the show. They could have edited that entire "Story" out and I wouldn't have missed it.

NICE TOUCH: Joe saving Tracy--I like it and it might make for his acceptance into the fold. He's SO '70's playboy I'd love to keep him around just to fool around with Ms. Q some more!!

RUMOR Come TRUE: Steve Burton is leaving GH. That's a whole other blog. It certainly made news all over the place--mainstream media included. 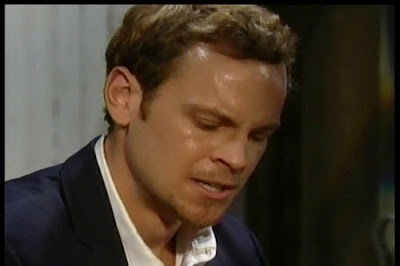 ACTOR: I'm giving it up for NATHIN BUTLER! He really did a great job with Ewan's angst and pain and madness. Too bad he's leaving. Everyone (save a few) had a great week, btw. NLG and SR were spectacular as were Ingo and he.

GOOFY WUB STUFF: Cam and Aiden in Disneyworld with Gam. It's just too funny to think about!! LMAO. POOR AUDREY!! Plus she's stuck there longer because there's a PATHOGEN in town!!

Ok, that's all I can write. I hope it made some sense and I didn't ramble TOO much. I am putting up you tubes of things for you to watch on the Dead Man's Hand. Hope it all helps. Did you like the show/explanation this week?  The promo for Sept 10th with the location shoot looks exciting. Guza's probably mad he didn't get to do it! LOL. Sept 10th is date GH goes to 2pm, btw so it's designed to make you watch!! I'm going to have big trouble watching live at that time. 3pm was just about doable. wah. Not sure how this fall will progress blog wise. I hope I can keep doing this.

Thanks for putting up with me all week! I do think GH is trying really REALLY hard right now to be exciting, bring in the vets and make us all sit up and watch. That's saying something!
By kdmask - September 02, 2012
Email ThisBlogThis!Share to TwitterShare to FacebookShare to Pinterest