Strange Energy IN This Town

Wyndemere, Nik is all upset as the movers take out Ava's stuff. Laura consoles him. Says the investigation might be ending soon. Tells him about the designer boot and print found. OH! Laura mentions SPENCER and he hasn't called Nik. She says he's off on some remote place. Nik says it's good because the "stalker" can't find him. 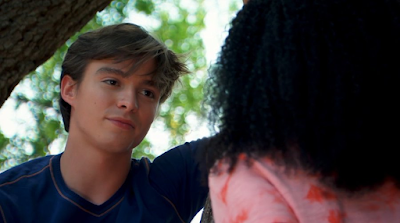 Spencer is at the park..he and Trina talk in a tree lol (real tree). Then he calls her out for being on the phone. She says Joss doesn't think he's real "like Jan Brady and George Glass"--You don't watch classic sitcoms?? LOL He freaks when she tries to take a selfie.  She calls him a diva. Then she tells him they might be closer to catching the stalker because of the boot print and the size. He leaves quick!

Ava and Nina are in Ava's old Penthouse which she could get back I guess. Nina talks to MikeSon. He tells her to come back to Nixon Falls. She says not yet...but she thinks of him 'daily'. Oh, Ava is living with Nina. She asked her to move in. They talk about Nina and MikeSon.

Scotty and Austin. He wants free medical advice because when they do what they are doing, he'll be filthy rich.  Scotty says the town will probably hate him for what he's about to do to the Quartermaines and Michael.  "There's Strange Energy in this town"...

Maxie is still yelling about her baby at the Q house. She says she has to move. Brook says she's too emotion to go right now. MONICA walks in: MAXIE! You're here again!! LOL Maxie says not to worry, she's leaving "Say goodbye to Bailey".

Q House: ELQ Meeting Time! Val wonders who will get CEO...Ned or Michael. Michael says he doesn't want to have the job. He's busy with Wiley and Aurora. Says Ned is the best man for the job. Ned asks Olivia what she thinks. She says he should do it. And they should take it "one day at a time". Then the meeting gets called to order and Scotty says it can't start until all Quartermaines are present.

Lenny is back at on the scene...his heart is good, he had a bunch of tests. I think he's going to end up at GH. I really do! You watch! Oh Dr. Ford comes in to talk to Lenny and Phil alone!! UT OH

By kdmask - July 13, 2021
Email ThisBlogThis!Share to TwitterShare to FacebookShare to Pinterest