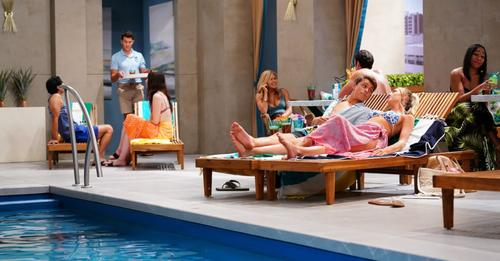 Sam was a HOOT... Then she and Dante just fall in the water LOL!! They go watch the fireworks

Maxie was showing Monica how nuts she was !!

VAnna SO cute. Anna's pulling away .. they are such good friends IRL and I like this.

Nina and Obrect: Glad they are friends.. Nina has Ava AND Lesil AND Maxie AND Sasha..wow, nice. "Mike..Such and industrial name"! AHAHHAA. She tells her about Carly and Jason getting married.

Carly talking about the bridge and Jason's all: OKAY AHAHAAHAHA. Britt and Jax...rubbing it in as much as they can!! "Jax liked my room too"!!! Carly goes out to be with Jax and yelled at him because it's ALL ABOUT HIM LOL  OMG Jax reads her so hard!! "You're as demented in this life as ever"!! WOW.

Jason tells Britt he's not going to tell Carly about her Huntington's Disease and he'll be there for her. She tells him to just shove it.

Cam and Joss... talking about their past. Nice scenes. I got some fluffy feels.

Don't care about Nixon Falls but it didn't bother me today.

Spencer sees Trina reading in the park. He brought her water. She's mad he ghosted her at the fireworks. They talk about art and France.

Stella and TJ have lunch together, Stella is talking about Curtis and Jordan. Looks like she wants them together and not Portia. WEIRD.

Alexis and Shawn talk in the jail. She talks about solitary confinement--she's going stir crazy and the walls are moving in. She's starting to have a panic attack. She settles down then he tells her that he told Molly about the Judge Carson thing and she freaks out again. She knows Molly will charge in there for justice..

Curtis and Jordan talk at the PCPC about their divorce. She's been dragging her feet on signing the divorce papers. She says she's been busy. Then says she will do it asap. Puts her wedding photo in the drawer.

Martin and Nik talk at the Metro about his divorce. Martin says they found "unique" boot prints at the gallery.

Then Nikolas finds Ava at Charlie's and tell her he wants to run away with her. Wants to sail around the world until the stalker is caught. She won't take Avery away from PC.

Molly has lunch with Judge Carson. OMG She immediately goes in with you give black people different sentences than you do others. WOW! She goes on and on. Martin interrupts and asks if there's a problem.  They go back and forth. Molly digs her heels in. I think Martin is trying to smooth things over with the judge but will help Molly. OMG She leaves and Marty is taking to her "I've known you for 20 years". She says she's even had 'black roommates'!! WOW.. and some people only respond to incarceration!!! WOWWWWWW

Nikolas goes to Mike Corbin's grave... he's his grandfather. Courtney was his mom. I forgot that for a half minute.

WOW!! Martin recorded the judge saying those things!! He takes it to Jordan and Molly and TJ are already there!! Ohhhhhhh good twist!!

By kdmask - July 08, 2021
Email ThisBlogThis!Share to TwitterShare to FacebookShare to Pinterest