Considering Britt and JAX hit the sheets I was going to SKIP TODAY but since I'm gone tomorrow for my mama's birthday, I thought I'd be good and show up. NOT HAPPY Tho. I mean, really? UGH. Can't even. I'm closing my eyes. 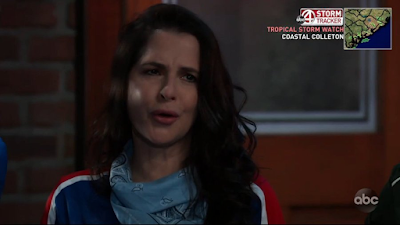 Everyone at Charlie's to have a surprise party for Chase. Jordan, Sam...Dante...Liz, Finn..Anna.. Violet.. Michael all in baseball uniforms. Sasha is not playing she's PG. They yell surprise!! They got them Bride and Groom baseball shirts. Everyone is happy but...Michael. THEN Sam overhears Michael talk about Carly and Jason getting married. She runs out of the bar and Liz runs after her.

Liz took a bottle of vodka! They do shots and talk about how horrible Carly is and always wanted Jason. OMG Sam has a bag of Jason's stuff. SHE BURNS HIS JACKET-- dominos set and Springsteen Tickes they never used. Then she THROWS A GIANT BOTTLE OF TEQUILA ON IT!! AHAHHAH BOOM!! OMG then, the fire department calls DANTE and tells him they are down at the pier burning stuff. Finn goes with him. There's a fireman putting out the fire and Sam and Liz are shitfaced!! OMG! Dante tries not to laugh. Sam says it's her independence day. Great fun.

Jax and Britt. No comment. LOL OMG BUT Britt totally tells him the story of BBQing Emma's baby doll! AHAHAHA TOO FUN.

Jason and Carly are going to tell Joss they are getting married. Joss is happy. Of course she is. She's like well you are friends and who else are you going to marry? LOL. Jason gives Carly an aquamarine ring, blue like his eyes. Vincent Novak is at the Metro Court. Jason thinks it's to make peace. They are going there to watch fireworks and show him they are engaged.

Trina and Spencer are at Pier 54. He's laying in the sun. Wants her to lay there too. Says "in your birthday suit".. She's like NO.. Come to the park with me (Joss texted her to go there because she has to take Avery with her).

Cam is talking to Jake in the park. Jake is like "We cool" Cam is like "Um, I can tell you are still mad" .  They talk it through, end up crying. Awww. Trina comes over. Spencer says he's not ready to "meet" Cameron and Joss. Oh, Trina calls him Victor. I missed that yesterday.  When Spencer doesn't show up, Trina gets sad and goes to watch the fireworks with her mom. Cam tells Joss he thinks there's more to their relationship than a kiss.

At the Qs, Monica is suspicious of Maxie always coming over. She asks Maxie where Georgie and James are. Maxie says with her Mom and Mac. Brook tells her to stop coming over to see Bailey after Monica leaves. Maxie is like This is the last time. Brook doesn't believe her.  Then Brook goes to change and Maxie is talking to Louise and Monica hears her!!

By kdmask - July 06, 2021
Email ThisBlogThis!Share to TwitterShare to FacebookShare to Pinterest