TJ and Molly talk to Marty and Jordan about Judge Carson and her statements they taped. Jordan is sending them to the judicial review board.

Terry wants Portia to back her for COS. Britt is all snotty, Terry is snotty back! LOL Portia tells Terry it's a hard job. Her Dad was COS and it was all politics and Paperwork.

Curtis is angry that Stella talked to Portia about backing off.

Maxie wonders why Austin is at GH. Later, Britt is welcoming him to the GH Staff! He says he has business in PC and wants to move there.

Maxie and Anna go to the Metro Court. Anna tells Maxie she might know Austin (she flashes back to seeing the photo). Then they talk about Valentin. Maxie thinks Anna likes him.

Alexis is having a fit about going back into solitary confinement. Shawn tries to calm her and the guard grabs her. She screams and falls. I think her wrist was broken before and she didn't get treatment. Shawn tells the guard and the guard is like "NICE TRY"! Shawn says he won't let the guard take Alexis. UT OH. The guard goes to hit Shawn and Jordan walks in to stop him!

Carly says Monica will be pissed off about her marrying Jason. They go to talk to her at GH. (see below) 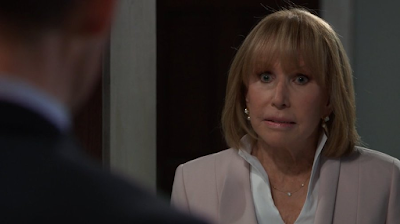 Monica talks to Valentin about living there and ruining her company at the same time. She tells him he can stay because she's put up with worse, mainly her sister in law !LOL and URI the bodyguard (who seems like a butler now) totally checks her out when she leaves!! Martin goes to see Val. They talk about ELQ. Martin thinks Michael might be willing to share power with him. Valentin can't listen right now, he's thinking about Anna.

Carly chickens out about talking to Monica..makes Jason go alone LOL He tells Monica she's like DOH!! Then she says if he's happy, she's happy.

OMG Carly totally lies to Britt and tells her that she and Jason admitted they loved each other right after Sonny's funeral-- and waited until now to act on the feelings. Making Britt believe that Jason never really cared for her!!  Carly said what she and Jason had was fleeting. And what THEY have is "forever"...oh, Jason overheard part and he's not happy! Britt storms off

END:
Alexis hugs Molly; Shawn hugs TJ. They are at the PCPD now.

Austin is on the GH Staff.

Monica tells Liz and Finn the cameras are all fixed !! LOL So they can't sneak out Peter even if they wanted to!!

By kdmask - July 09, 2021
Email ThisBlogThis!Share to TwitterShare to FacebookShare to Pinterest