We started outside the studio today !! Right in the entrance. Portia and Curtis. They talk about Aunt Stella trying to meddle.

Austin sees Amy. She welcomes him to GH. He says he's going to have the time of his life.

Alexis is in GH getting her wrist checked. Dante is in with her as part of the PCPD. Sam comes in and hugs her.  They talk. Then Austin comes in to examine ALexis. Sante are all: WHY YOU HERE? He tells them he's move to town. Sam isn't happy. (He never says his last name of course). Anyway, Sam wants Alexis' first doctor, Portia. Austin leaves, pages Portia.

Britt dreams of Jason in her office then Jax walks in to check on her. Jax talks about their night together. Britt basically friendzoned him! Jax says that Carly is drawn to danger and he thought it was Sonny's fault but it's Carly.  Dr O comes in and Jax leaves. Dr. O is sad she told Britta to follow her heart only to get it trampled.

Carly tells Jason she had a few things to say to Britt. He's like WHY? She says to let her know there was NO HOPE of them getting back together. She then says "Unless YOU want to"!! Jason tells her not to lie. "I ONLY LIED about BEING IN LOVE!! this is HARD FOR EVERYONE"!! He tells her not to talk to Britt. Heh. Walks away.

Carly walks down the hall, runs into Austin. He asks her where the Corinthos wing is. It comes out that Michael is her son. He says he has big shoes to fill since Lucas LEFT GH? What? Did I miss that? Anyway, Austin wants to know all about the head of the board, Monica Q. 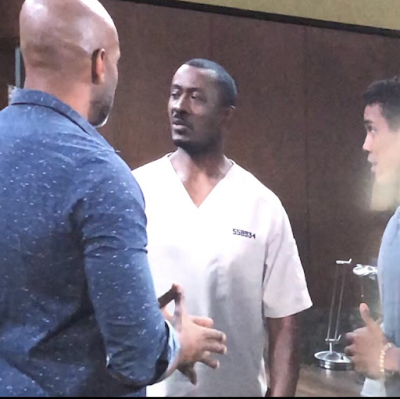 Jordan tells TJ and Shawn that Molly is going to file a complaint against Judge Carson. They talk about what could happen to Shawn. He could get out with time served.  Curtis ends up coming in and getting the whole story from Jordan.

Maxie runs to the Q house, tells Brook Lynn Austin is moving to PC. She's YELLING about Bailey being HER BABY! GOD! like YELLING!! Brook Lynn tells Maxie she's being too paranoid.  Maxie cries badly. Brook Lynn says that maybe they should stop the pretense. Maxie says no because Peter's still out there. Brook says that's why she has to stay away from the Q house. Maxie says she has to leave town (KS had surgery so I think that is the plan to have her gone for a bit).

By kdmask - July 12, 2021
Email ThisBlogThis!Share to TwitterShare to FacebookShare to Pinterest