ALL INTO THE POOL! 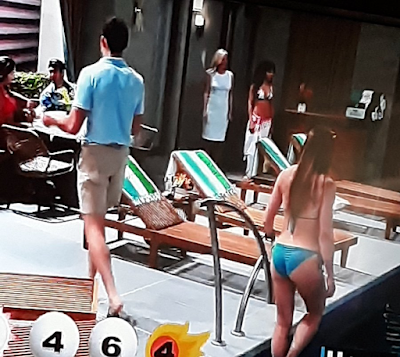 Pool Set being used, I Like it!! People even got "in" the pool. Oh, Gladys has nice new blonde hair. Wow she does look younger! She tells Brando that now there's a shake up at Corinthos' Coffee, he should jump in. Carly listens in. She tells Gladys she's not family. Then Joey Novak (the younger) walks in.

Bar set for NYC. Valentin says to Anna he found out what the "sing along" was in the back. "Some woman named Maeve is leading them in Danny Boy"!! OHHH Ryan's HOPE!! He says they have to Go to the hospital to talk to the chopper guy later (AH!! NY Methodist where Sonny is). and the bar reminds him of a Pub they went to in Dublin. They get a call that the guy is back in the hospital.

ANOTHER SET---NY Methodist for Lenny. The doc comes out and Lenny goes in for tests. MikeSon says he might rememeber NYC but it could just be the movies he's seen. By the way a ton of people noticed he's not gray anymore LOL. He goes to talk to the doctor about Lenny and of course, VAnna just miss him . Because it's GH.

Mike finds a cap in the hall that looks like Mike's old cap. The "hears" memories of talking to "Dad".

Valentin walks right into Phyllis. I think he knows her from when she was in PC to visit Nina?

Ellie left Spinelli. He's drinking and talking to Jason. He says Ellie didn't like the direction their life is going and wanted to leave. Jason says Spin can always walk away from the business. Spin says he can't. He basically says since Jason came back he's "Jackal" Again and WUBS him LOL. GEESH

THen Maxie tells Spinelli about going to Texas and wants he and Ellie to have Georgie the entire time she's gone. Spin says Georgie would love Texas. Maxie is sad he and Ellie are splitting up.

END:
Val is chatting with Phyllis while she waits for MikeSon

By kdmask - July 15, 2021
Email ThisBlogThis!Share to TwitterShare to FacebookShare to Pinterest