Oh, I had trouble thinking about what to write this Sunday. So I sat, and I sat...I went over clips and photos. And I sat.
So.
How was GH for you this week? I didn't think it was bad--or all that boring but I'm finding it hard to be excited or add anything new to the conversation.
Luke tried to burn himself out of the roaps.
Anna's solving the Heather mess
Heather's running all over like a chicken with her head cut off
Steven Lars is an idiot
Pat sees "Robin"
Starr Sings
ConKate's bug eyed.
And... Blair's in town.

That's it.
JaSam was off all week...so was McBain. Sonny seemed to be standing in the warehouse for days while people came and went to Atlantic City. I do find it hard to care about the Joe Jr. and Trey back story.
The promo on Friday gave away just about everything that's happening on Monday so there's that.  Not a lot happening if you ask me.
I had an interesting talk with my hairdresser last week. She is a big GH fan and so's her BF,  Krissy. They loved OLTL as well. She was like: so..is anything happening I should know about?


We know eventually the baby will be back...that Jason will find out the truth-- yada yada. Robin's alive and some contrived story will be brought into play. Word is Jerry Jacks will be back and Ewan tied to it all. NLG even tweeted she's kissing an "old Flame"--presumed to be Mr. Jacks. 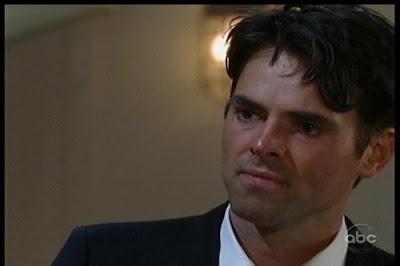 SCENE Not SCENE of the WEEK: For the first time the best scene of the week for me was also the worst. How can that be? Well... here goes my explanation:  Jason Patrick is stellar in his scenes as always. Kimberly brought her single tear and was awesome. I loved it..and I also hated it. I told you that day it was so reminiscent of the Ghost Gigi and Rex story I could have gagged on my iced tea.  I am NOT into that. I am in dire need of new material. If Delphina comes out I'm running the other way!

Kudos for the Todd Blair scene as well...it was brilliant. IF you know them from OLTL. If not---then. Sorry.

So the discussion remains about watching GH. Of COURSE I'm going to keep watching the show. Everyday dialog is hilarious--and it's MY SHOW.  The cast, crew, production team et al are fantastic. We have our 50th anniversary coming up. (note I said WE lol--) Yes, I want more of this and less of that. The show is a so much better than last year, I can't even tell you.  We need to watch or DVR as much now as ever. I can see that Lara Spencer all chipper and ready to be in OUR time slot. All I can say to that is BACK UP!


Scuttlebutt: SID is saying Jen Lilley is out and Kirsten Storms will be back filming soon.  Glad Kirsten's back, sad Jen is leaving.

Frank V said something like he loves Nurses and Loves Singing so...that may be a fine thing for the Nurses' Ball return at some point!! They still keep promising "returns" and I hear Sebastian Roche is coming as Jerry. See the spoilers on WUBS NET.

Another BIG Rumor? Someone from FCW said Steve Burton sold his LA home and is moving to Nashville for good (contract is up in Sept).  Now this is TOTAL unconfirmed gossip but I'm feeling all TMZ right now 'cause I need some fun.
On a more sober note, it doesn't look like John Ingle will be back as Edward anytime soon.


In the New York Times Crossword:

By kdmask - July 22, 2012
Email ThisBlogThis!Share to TwitterShare to FacebookShare to Pinterest