Today was ASK GH with Kris Alderson ...this is her tweet about Maxi's outfit:
Kristen Alderson ‏@krisalderson

@jen_lilley 's outfit 😍 it's a shirt and a shirt! They're separates! Can you believe it? Props to our Emmy winning wardrobe team. #askgh

You know I love the wardrobe stuff. And Prop Stuff..and set stuff. 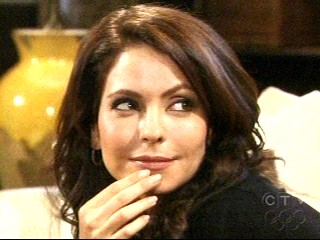 LSD for LUKE!! YEAH! WE all NEED SOME!! Heather is going to give it to Anna? Huh? Oh to make her cray-cray.
As a baby, it was Steven Lars (then known as P.J.) who caused Heather to ingest the crazy-making LSD. Just and FYI...speaking of I HATE the Steven Larz and Olivia story. She is too good of a character to waste on this nonsense. Let her run Kelly's..or marry a cop-- I don't know.

RJ should have walked in that club because it has Indigo's lighting!! Anyway, I like KA's singing. It's bland but I've heard worse. LOVED her dress very unexpected for her age.Just looked nice.

I think Trey is gay...he's not even looking at Krissy's tah tahs. it would be a nice touch, we need a gay character, imo--and he's a MOBULAR's son.

Anna caught the forger guy-- and Dante looked like a Men in Black. They also found out about the Memphis connection and Maggie's murder!  AND Heather goes after Olivia with the tea LOL.

Robin says "Save Me"...
SHE'S GIGI and if you know What I'm talking about back me up. WHAT LAZY WRITING IS THIS? first the DID stuff NOW the REX/GIGI sheeze??

I love Ron you all know that but this?
Wow.
Not cool.

By kdmask - July 19, 2012
Email ThisBlogThis!Share to TwitterShare to FacebookShare to Pinterest