Hello Wubbers! It's Sunday and the end of a hectic week...did you like GH? Wasn't Sonny throwing that giant try of barware written in just for us WUBBERS? I was howling!! LOL...If you can catch it again, watch Jason just stand there and blink a bit. Heh. 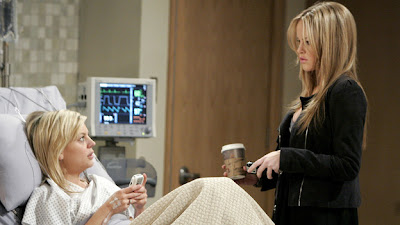 Hospital phone calls?
There are a LOT of new scoops up and a LOT of rumors floating around. Most interesting one I saw is that Sonny and Skye hook up...hmmmm. Then I was thinking isn't this the longest Sonny's been without a woman in FOREVER??????? No backup plan. No 'nothin!! He's gotta be dying.
Maya Ward comes to the Q's Wed...where's ZOE? Did they just ditch the character? Is she coming on later? What!! I thought it strange there was never a release about who's playing Zoe. So, maybe Maya moves in and later on Zoe will show up. Maya will end up working at GH-- hopefully having more shifts than poor ghostly Dr. Matt has. (Steven Lars is in danger of going that way as well--he's reduced to barking at staff and taking care of "the boys")
More of Sonny's trial is going on--- Johnny's going to make him squirm. Would YOU say Sonny was abusive to Claudia? I'd say he was certainly verbally abusive but she was right there with him. I still miss Sarah Brown, btw...:(
Watch for Georgie again on Monday. Wonder if anyone will say: HEY! Did you call Felicia?! ;/
Connie Towers will be on the LA Stage to Benefit LA Aids May 1st! Connie will be performing from 'The King and I,' the 1978 revival of which she performed in for nearly 800 shows, opposite Yul Brynner. GO HELENA!!
Besides stalking me on TV and in the movies, seems FRANCO is a published author! s short story, Just Before The Black, is being published by Esquire Magazine. He also  just signed a deal with New York book company Scribner to publish a full collection of his work titled Palo Alto, which will hit stores this fall. Dang.
Someone slap me, but I'm up to 6300 followers on Twitter! Join the fun! Get live tweets during the show--dish with a bunch of fun peeps and look cool when you say: I JUST 'tweeted' that. heh.


By kdmask - March 28, 2010
Email ThisBlogThis!Share to TwitterShare to FacebookShare to Pinterest