Brad and Lucas are STILL in bed....and they said 48 hours.

Felix is counting cotton balls and in walks Sabrina. First thing he tells her is he almost had a 3way. LOL. Then tells her about Milo and Epiphany.

Nina daydreams about stabbing Silas with a giant butcher's knife.  Silas wakes up and they talk about how good sex was. He gives it a 13 out of 10! They do it again.

Maxie and Lulu are in another cabin, tied up.  Pevi (Peter/Levi) got a haircut!  He says "This Operation is Personal"!  He goes off on Felicia, talks about what a bitch she is.  Geesh, HE sounds like Peter Harrell himself!  maybe de-aged? Naw, that's even too much for GH

Anna figures out Peter Sr. could still be "out there". Hmmm is HE Fluke? Why would he hate Sonny then? Plus, he's pretty obscure.
Welp.
Pevi drops his phone when he knocks the soda out of Maxie's hands.  Maxie kicks it to Lulu. Lulu calls Dante (then the show ends) 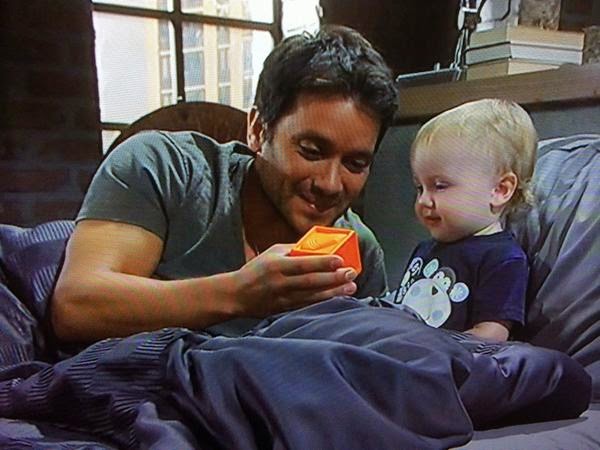 Adorable Rocco has on a Fronkey shirt!!

Liz comes over to watch Rocco so Dante can go back out to look for Maxie.  She also brings some of Aiden's old toys for him. Including a SOCK FRONKEY.  Nik comes over later and they discuss his 'CHOICE'. (Or lack thereof)

Britt is going to tell Nina if she can have babies or not.
By kdmask - August 28, 2014
Email ThisBlogThis!Share to TwitterShare to FacebookShare to Pinterest