Town Square ..Avery and Donna trick or treat with Sonny and Nina. Carly's talking to Sam about how happy she is and sees them and gets all pissy. She wants to talk to Sonny ALONE! Why did they have a sleep over with Nina? Oh it was a movie night. Carly says thank you for respecting her boundaries.

Carly tells Sam about Florida. Flashes back to Drew and her cliff kissing.

Sonny sees Holly and is like WOW, back from the dead. Holly says she can't remember the last 2 years. Sonny is like YEP, I hear that! She leaves to go get cider. Robert and Sonny talk about Anna being in jail.

Alexis' Office. Drew brings in Scout for trick or treat. She's a butterfly. Alexis tells Drew she saw his name in the news with the Florida grave stuff. He wants advice about the insider trading threat Ned threw out. Alexis says it's absolutely insider trading but the FCC probably wouldn't press charges unless the parties were 'romantically" involved. ut oh

Holly and Robert try to figure out how to spring Anna from jail. There has to be new evidence for there to be another bail hearing. They go to the town square to check out the halloween fest. 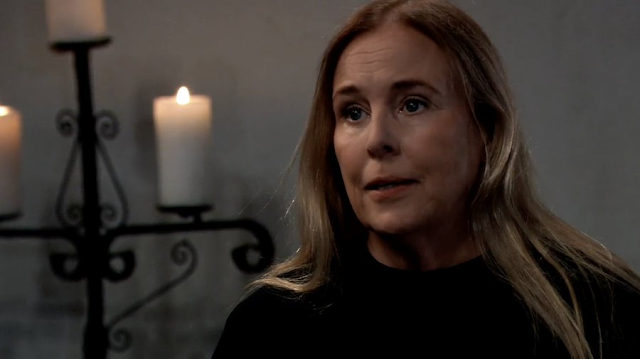 Laura and Valentin. "God didn't summon me, your girlfriend did" says Laura!!  VAL tells her about Lucy being shot and Anna's set up. They go to leave and Bald Baddie comes in. Oh he works there. He wonders who Laura is "I haven't seen you here before sister".  Then the bald guy sees the passed out guy and pulls a gun on them. Val knocks him out and Then Father Kevin shows up! YIPEE!! they put the guys in the crypt.

Finn and Anna talking in jail. He tells her he met Heather Webber. THEN he tells her all about ELIZABETH! geesh!

Elizabeth wants answers about their time on the island.  She asks who Reiko Finn was.. Jeff looks shocked.  It comes out he had an affair with her when she was married to Finn. Liz' Mom knew too. Liz knows it was more than an affair. She tells them about her dreams and blacking out and such. Jeff says Liz found them together. She asks if he pushed Reiko down the stairs.

I think Alexis opens a letter from The Hooker

Val, Kevin and Laura run out to get Charlotte

Holly calls someone with an update on Robert. I Think someone has Ethan!

Jeff finally tells Liz SHE pushed Reiko down the stairs.

By kdmask - November 01, 2022
Email ThisBlogThis!Share to TwitterShare to FacebookShare to Pinterest