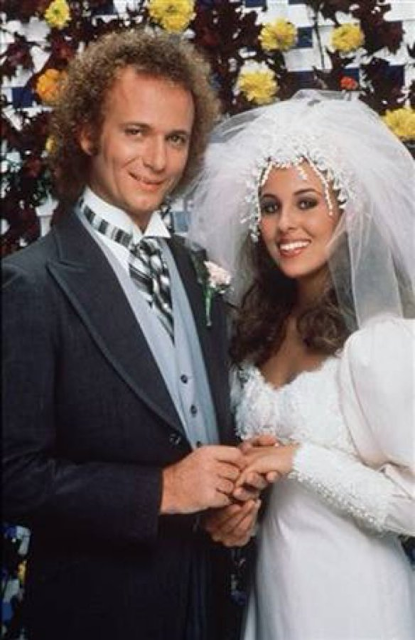 THESE TWO got MARRIED 41 years ago?? What!!? So long ago and yet so close. Boy, did I wait for that wedding for MONTHS. It didn't disappoint; such a great location shoot and beautiful clothes and some surprises!

Nina sees Carly goes into Brick's hotel room! (to get the antibiotics) She goes and tells Sonny. hey are kinda flirty. Sonny says they were always like that. Then they try to eat dinner. Nina says won't it be weird if they date? Then he decides to go up and confront Brick.

Liz comes into Finn's office, tells her Dad to leave. Finn has to go because of a page. Liz tells her dad her name isn't Lizzy, it's Elizabeth and all he does is ruin things.  They talk about the last 25 years. Him abandoning her and Sarah too. "I wasn't perfect like Sarah". He says he felt closer to her...she says why. He says she's her own woman. Anyway, he leaves.
Liz talks to Finn...turns her phone off. Wants to know if Finn wants to stay with her. They talk then she goes to Wyndemere. Finn thinks she's blowing him off.

Joss tells Dex he's hot..he says "SO ARE YOU" ahhaa. get it? She says no, your fever. She tries to find out why he works with Sonny. He flashes back to Michael telling him not to tell her he's working with him. They banter. He likes the Georgia Bulldogs. Carly comes in with the antibiotics. She says his fever should break by morning. Tells Joss "Dex is DANGEROUS" lol

Drew tells Willow he can help with her finding her bio parents. LEO finds a phone (Dex's) and they have to charge it. Michael figures out it's Dex's phone.

Drew tells Willow he will take a reporter from Aurora to interview the commune people to find out about that time and Harmony.

Nikolas gives Esme a bag to pack and says they are leaving where no one will find her. She says she's not going.  Then she fakes cramps. Dimitris runs in. Nikolas says she's faking it. Then he calls Liz.. she doesn't answer his voice mail. Then she switches her phone off. Oh, she ends up picking it up and going to Wyndemere.

Liz and Nikolas go into the room and Esme is ON THE FLOOR!!

By kdmask - November 16, 2022
Email ThisBlogThis!Share to TwitterShare to FacebookShare to Pinterest