Did You Vote Today?!

Felicia, Mac and Cody are at GH waiting for his DNA results. There's a backlog. 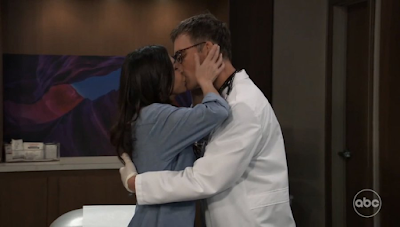 Anna on her way to GH before going to Pentonville. She's getting a blood treatment first (thanks to Finn).Valentin tries to call Sonny but it goes to voice mail. Valentin is like: YOU HAVE TO MOVE NOW, Anna's going to Pentonville tonight!! Valentin then goes into Anna's patient room, dressed like a doctor with an ID tag that says: Hamilton Finn. He tells her the plan that Sonny's man is driving the van and she'll be let out on Rt 31 to make her escape.
Felicia sees Valentin later and asks if it's all set. He says as long as Sonny does what he's supposed to do...

OH DEX IS DRIVING ANNA! THEN, A guy comes out and says HOLD UP! Another passenger. It's HEATHER WEBBER! PFffffffft!! The prison decided to do a two for one. Anna's annoyed. Dex is like :UM, well.. and Heather says: ANNA !! Looks like we are car pooling!! ahahahaha

Sonny is talking to Michael in the park with Nina. Michael accuses them of trying to see Wiley. Sonny's like WE WERE JUST WALKIN' IN THE PARK! Sonny takes a call. Nina tells Michael to be more respectful. Sonny comes back and Nina drops that Willow is turning to someone else. Michael is like: Shut up. Sonny says: YEAH I SAW IT TOO! ahhahaha PETTY! Michael ends up leaving.

Britt calls her specialist and says she's having symptoms. Then Sam comes in and has info on the necklace. It's worth 35million dollars... Leopold Taub was the last owner in the 80s. It was in a Paris Fashion show then no one knows. Could have been bought or stolen. Oh the necklace gems are from THE ICE PRINCESS!

Laura tells Victor she took Charlotte out of school and OH! Valentin's home too! ahahaha. Victor isn't happy. He leaves. Laura says that Victor could have started her mother's fire and framed Anna for Lucys' "Murder"

Esme still trying to shimmy down the sheets.

Lia and Finn at Liz' house. Finn isn't mad she didn't tell him the real reason for her visit. He hopes she got the answers she needed.  Then she says her Dad was seeing a doctor and she pushed her down the stairs and she died. "It was my fault" she says.  Finn is angry her parents tried to make her forget and sent her away for 25 years.

Cody opens DNA results but doesn't say what they are.

By kdmask - November 08, 2022
Email ThisBlogThis!Share to TwitterShare to FacebookShare to Pinterest