Michael sees Willow and TJ. He thinks Willow's cheating on him. Willow is angry and says "is this NINA's FAULT"? Then she asks TJ to leave and tells Michael. She tells him about her cancer. He says he's so sorry and hugs her. He says that it's her choice.. then and now. She tells him she has to start chemo and get a bone marrow transplant.

Val is worried about Anna, she's not at the drop off. Sonny's trying to call Dex, he's not answering. Dante comes over to Sonny at GH. Says he wants to go for a beer. Dante gets a call about the police car. TJ comes out and is mad and asks Sonny where Nina is. Sonny says he knows about him  and Willow. TJ says he can't believe Sonny thinks that. He knows TJ and he would never cheat. Sonny says ok, I believe you but Michael won't. 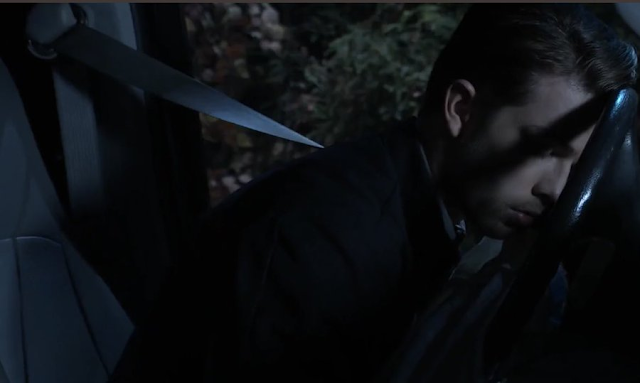 Van: Guard, Dex and Anna all passed out. Heather? MIA. Dex wakes up, tries to wake up Anna. Anna wakes up and is good.. just a little head wound. BUT she notices Heather is gone. Then Valentin finds her and they leave. Dex hears sirens and runs.

Mac and Dante show up and realize that Anna was going to be sprung from the van and she's on the run.

Nikolas is frantic that Esme is gone. He goes into the living room and finds a light bulb gone.. and THE HOOK IS THERE. Nikolas gets the fireplace poker and the hook comes down. They tussle, he hits his head and the hooker runs. Phone rings: it's Liz. He gets up and looks around. Sees the hook. Says it's from their boathouse and it must be Esme.

Cody reads the DNA results. Says 'I'm not your son".. Felicia was going to check it but Mac says why bother (idiot). CODY totally LIED to get that necklace. Cody still wants to be friends with Mac tho. Mac gets called away about the van. Felicia basically tells Cody to go away now that he knows he's not Mac's son. (Since he didn't care in the first place).

Liz and Finn. Very weird situation. He's like HOW do you know your parents aren't lying to you? He says Reiko said she fell. Liz says no. She tells him that Reiko and her father had an affair.  Liz cries and says she's sorry. Finn says he's sorry too. AND LEAVES!! HE LEAVES!! What a douche!

Valentin and Anna take off in the car...

Cody did lie, he's Mac's kid. He wants that necklace.

Finn sits in his office and looks at old photos of Reiko hahahahaa what?????

DEX stumbles in the woods, shot

By kdmask - November 09, 2022
Email ThisBlogThis!Share to TwitterShare to FacebookShare to Pinterest