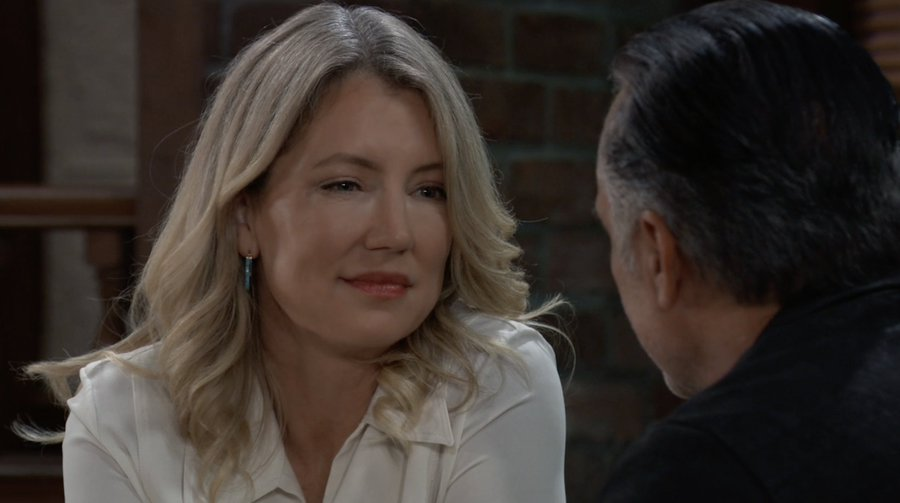 Kelly's: Sonny and Nina. Dex is patroling outside and they are both eating a sundae. Sonny is happy they don't have to hide anymore. OMG they are not eating that sundae. Nina says she loves Sonny.

Charlie's: Willow and Michael on Date Night.  EWWW.  Willow is anxious about her test results. Michael is oblivious to what they could mean.  The phone rings as soon as they get their sundaes (MORE SUNDAES!!) .. test results are in.

Maxie goes to Austin's office and sees Mason. Mason says he needed help with insurance and billing. Maxie wonders if he wants to go out to dinner. Austin is kinda mean, says NO. Then tells the ER he'll be down to treat the guy.

Maxie catches Spinelli talking about Society Set ups on the phone. She hears he wants to close it. They are at the Metro Court on the balcony. She thinks he did the SOcial thing because he's lonely after Ellie. She says he'll find someone one day.

Joss and Carly. Joss realizes Cam is in danger, tries to call him. Leaves a voice mail. She's frantic to go see him. Joss flashes back to Dex and his shirt being unbuttoned.

Jordan assures Portia and Curtis the PCPD will protect Trina (ahahaha!!) . Portia and Jordan then talk about the DNA markers and that Portia should tell Curtis the truth.

Cam is out on the bridge to look at the lock that he and Joss left. Flashesback to their zex scene. "Who's there"!! Oh it's stupid DREW! They start talking about Oscar. Oh, I think Oscar and Joss left that lock. They talk about the mountain where Drew left Oscar's ashes.

Joss goes to Kelly's to check on Cam. Sees Dex. They flirt kinda. Then Cam walks up. They talk about the hooker being after them. Dex goes in and tells Sonny.

Drew goes to Carly's house to check on her. She says he has to leave. Carly then realizes that Joss snuck out of the house.

Oh pretty boring for a Friday, are we still off schedule?

By kdmask - November 04, 2022
Email ThisBlogThis!Share to TwitterShare to FacebookShare to Pinterest