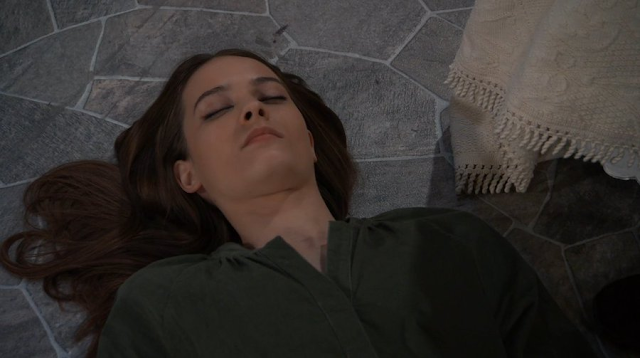 Mixed bag for me this week. I felt like the show chopped itself into TWO shows and then just inserted things wherever it could. Friday was a puzzling mess for me. Maybe it was my mood because we got snow? At least I'm not my brother, he's sitting on 5 feet right now!! eek! Buffalo South Towns are always dumped on!

Ok, here we go... grab something good, sit back and I'll tell you a tale...or seven!

So there was a LOT happening with week and when I sat down to write this, it's so apparent that there's a million stories going on and it's hard to keep track. Especially when we jump from timeline to timeline and it makes me dizzy!! We can't say it's boring though...right? RIGHT!!?? 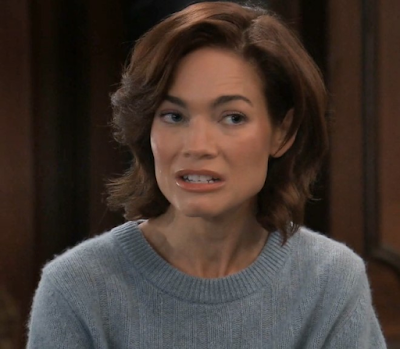 SMARTIE OF THE WEEK: I'm starting off with the good stuff!! Sure we could dwell on Elizabeth and her father and stupid Finn but why bother? WE have THIS!! Thank the writers that they put her smack dab into Nikolas and Esme's Tower of Terror Tale! Do I think Liz wouldn't automatically run to the police and get the ambulance there? Do I care?????? NO!! I'm loving it. Her connection to Nikolas, her figuring out ol' Esme was faking it and her just leaving because she has other matters to attend to!! LOL "WELP, Nikolas, figure it out"!! MORE please. She'd better not bring Finn on board to help with this or I'll scream! 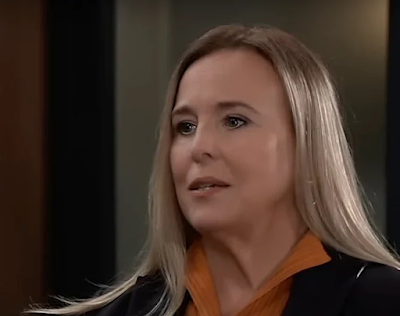 SMARTIE TWO OF THE WEEK: Geesh, Laura, we've needed you in this here town! She just knows things. Like... Holly being in cahoots with Victor. To be fair, anyone with eyeballs could see she was acting guilty but it takes Laura to spell it out to Robert. He finally climbs on board and they set Holly up to give Victor the wrong address for Anna :clapping:

NOTE: I would like everyone to take notice that the two most intelligent people on the show this week were women!! 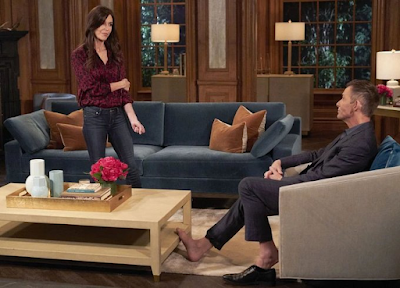 EDIT OF THE WEEK: I rag on the editing department weekly so I'm throwing them a kudos this week. I LOVED how the Fake-Out Anna capture was done!! The cutting between the chase and at the end, the house being empty while Anna escaped. Oh, it was just like Prime Time!! 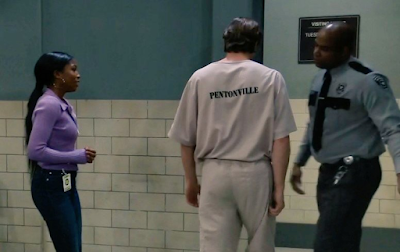 VISIT OF THE WEEK: Sprina Fans got a little closer to their dream of Spencer and Trina finally figuring out that they are in wub and ready to roll. Rory has been out of the picture for awhile now, hasn't he??  Anyway, Trina goes to see Spencer and they discuss the letter he left. Then he finds out she went to Comic-Con with the Cop and he's all jealous. In the end, he ended up walking out and Trina stood there wondering (again) what is up. 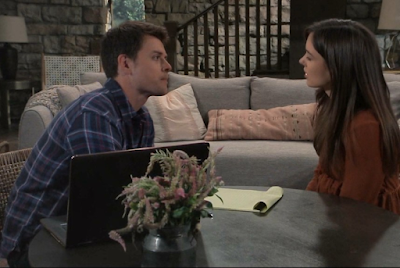 COTTAGE CORE OF THE WEEK:  Oh geesh, I have to bring them up because it's a step toward Willow and Nina reveal. Michael gets the bright idea of hosting a bone marrow drive. Leo finds Dex's phone! Drew offers to help Willow find her birth parents!! To be continued.. PS. So obvious Drew has nothing better to do in his life but find her parents. He of course, does suspect that Carly has lied about the DNA test she had done. We will see how this plays out. 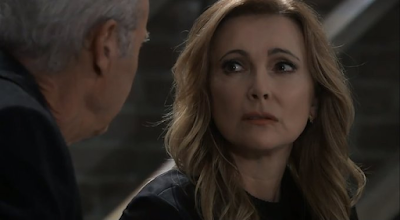 CAUGHT OF THE WEEK: Whoops. Holly-- you have some explaining to do! says Robert 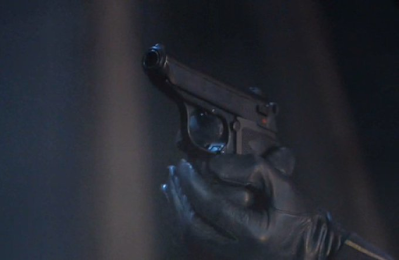 NOW WE KNOW OF THE WEEK: Speaking of Holly, we saw her shoot Lucy and then change out of her wig, mask and clothes. We all knew it but confirmation was given.

DNA TEST OF THE WEEK: No, it's not CODY... it's Curtis!! Seems like he doesn't have the genetic markers for schizophrenia after all! Not only that, he has ZERO! Portia points out how unusual that is..like REALLY unusual. It made us all pause: Is Marshall NOT his father or does Marshall not have the disorder!!? Either way, Trina is clear! 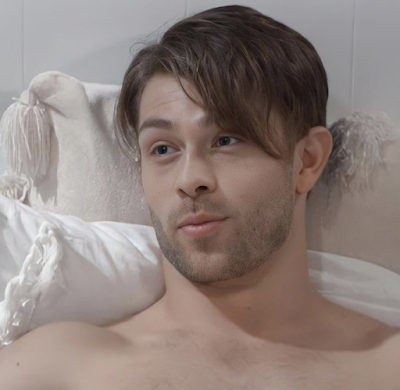 SOAP 101 AND 102 OF THE WEEK:  Joss continues to get closer to a sweaty Dex and actually gets her mother to go fetch some antibiotics! Who better to do that than the woman that nursed Jason and Sonny numerous times for various mobular injuries. And I get it...Dex is the 'bad boy' with a heart and Cam is the nice guy that gets the shaft. Only, I'm not a Dex fan...he just doesn't 'fit' for me. BUT I'M TRYING because I know this will be a 'thing'. 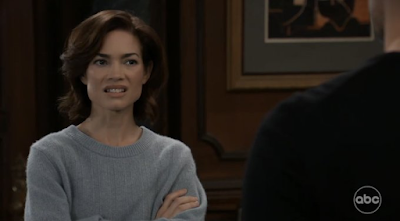 FACE OF THE WEEK:  HA HA HA!! Liz finds out Nik is the father of Esme's baby!! 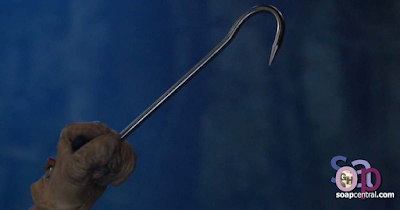 MISSING OF THE WEEK: Um.. the hooker? 'Member them?? It was a great story with good momentum and then.......??????? Hell, even Heather seems to be gone!! What the heck?! Couldn't you have at least hooked someone from Trina's Trig class or something!!? 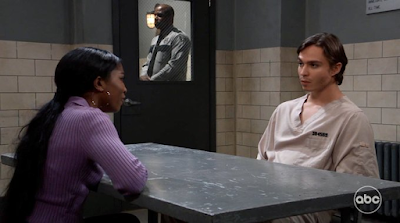 Trina visits Spencer and both walk away with nothing resolved

Curtis does not have the markers for schizophrenia.

Gladys is tempted by Ms Wu to gamble money away

Michael and Willow want to launch a bone marrow drive

Michael realizes Dex's phone was lost by his gatehouse

Joss nurses Dex with a little help from mama

Brick is in trouble with Sonny for helping Carly

Esme fakes a baby mishap and Elizabeth realizes her ruse

Finn and Jeff have it out, Liz tells her father to leave

Mac is sad Cody isn't his son...Cody is faking to claim the necklace

Victor finds out Cody and Britt have the Ice Princess necklace

Austin tells Britt a specialist will see her about her symptoms 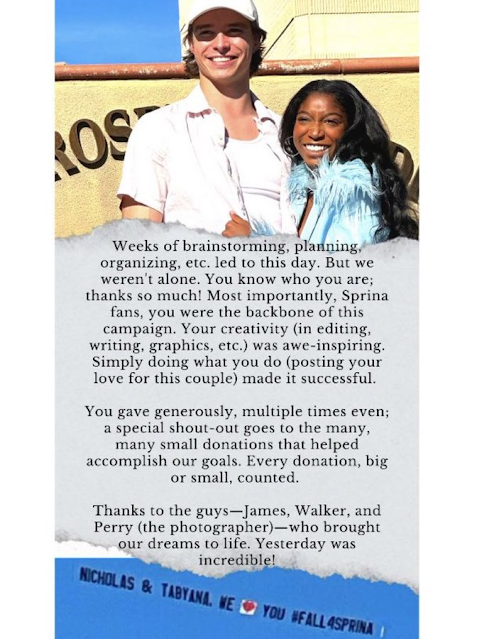 NEWS AND NOTES: Sprina Fans Did IT UP!!!!! They got together and flew a banner for Nicholas and Tabyana over Prospect Studios!
Twitter migration has started. I know NLG is over on Mastodon and I think others will follow. I'm at wubsnet@mindly.social and look for the #GH hashtag. Once you choose a server, it's not too difficult. So far Twitter is holding and I'll be there until it implodes or costs to post!

SPOILERS FOR NEXT WEEK AND BEYOND:  Holly is caught in her deception, Gladys gambles with the future,  Look for Q Turkey Day on the 29th and Dante goes to see Heather in jail.  Also: Repeat GH on Thanksgiving Day and No show on The Friday. 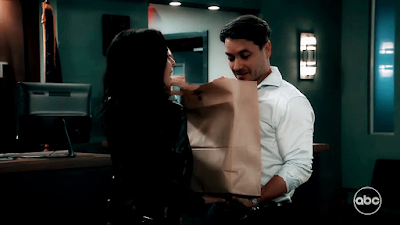 More little things that happened:  Sam and Dante had some cute 'family' scenes as did Felicia and Mac. The US Marshall guy was obviously working for Victor because I think Holly is the one that called him. I don't think Joss and Trina are worrying too much about their grades, do you? I like the Gladys/Wu touch, I need something to shake up that whole storyline. Maxie and Austin continue to vex me. Austin is so much more with Britt and everyone can see it. Happy Spin and Sam are working to get to the bottom of Cody. Having Leo find Dex's phone was a good touch too. Finn and Alexis talking in the AA meeting was a bonus. I like those two together. They are making Nina the new busy-body about town and I'm not sure I dig it. Sonny's still dimple donning around which doesn't bother me a bit. If I forgot anything else, I'm sorry!! TEW MUCH !!
That's a wrap!! Hope you enjoyed the read! Remember you can order your holiday cheer using the link to the right. See ya next week for 3 days! 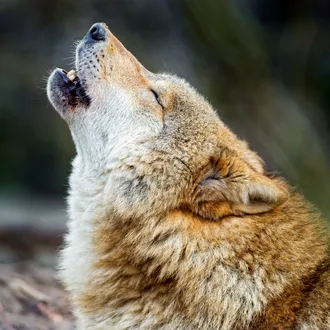 By kdmask - November 20, 2022
Email ThisBlogThis!Share to TwitterShare to FacebookShare to Pinterest