Laura and Valentin come to the jail. Anna kisses him. They brought Charlotte home. She'll be at Kevin and Laura's with security for awhile. Laura leaves. Victor tells Anna he has a plan. She's supposed to be going to Pentonville tonight.

Liz is home with Terry. Cam comes down. Asks how it went. Then goes upstairs to get a book. Terry asks Liz how she is feeing about her parental visit. Liz says manipulated and betrayed. Terry says she has to tell Finn.

CAM and Liz talk about her trip. She tells him she went to CA. He tells her Joss stayed the night and the Hook is after people around Trina's trial.

Finn doesn't know if he should call Liz.. then Heather is wheeled out to be transferred. She makes naughty jokes to Finn. Valentin comes out of the elevator, talks to Finn about a plan for Anna.

Nina and Sonny in the park. They talk about the hook.  BORING 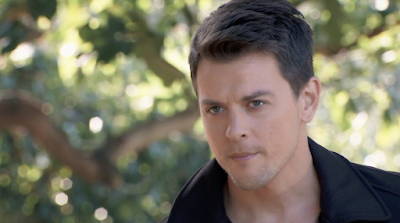 Willow and Michael playing with Wiley in the park. Willow's appointment is later today. Michael takes a phone call.. TJ comes up to Willow. She tells him she's going to tell Michael about her cancer after her appt with Terry today.  TJ and Willow hug. Sonny and Nina see them hug. Nina is all side-eye. Wiley goes up to hug Sonny and Nina. Willow pulls him away. Michael comes back and gets all pissy about them being there. GEESH! Public park, sir!

Holly gets a text from Victor asking her what's happening. (She's in Robert's office) She says she's still gathering intel. Then Robert comes in and the deputy mayor. She tells him to stop trying to get Anna bail or she'll call for his resignation. Then Laura walks in... HELLOO!! Laura hugs Holly. Tries to tell her Kevin could help with her memory. Holly yells I SAID NO! Laura and Robert go into the hall. Deputy Mayor yells at Holly that she could get them both caught.

Laura talks to Robert in the hall and wonders the timing of Holly showing up. She thinks Holly might not be telling him everything.

Victor is at Wyndemere and calls Johan. Says the necklace Britt has could be "the one" and if it is they can finish their whole "project". Then Nikolas comes down and blah blah blah. Victor thinks he might let him in on "THE PLAN"...about fking time. I'm getting bored and I really want to like this story.

Victor finds out Charlotte is gone from her school

Esme ties the bedsheets together to try to get out

Anna is going to be transferred to Pentonville--OR IS SHE ??

By kdmask - November 07, 2022
Email ThisBlogThis!Share to TwitterShare to FacebookShare to Pinterest