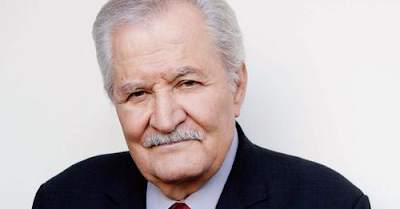 Sad to hear of John Aniston's death. I'm not a Days watcher but even I know he's a legend in the genre.

TEMP NIKOLAS! GEESH!! TEMPS are the new recasts or what? Anyway, the windows are boarded up in Esme's room. He goes downstairs and Ava is there. Ava tells him Esme is back in town. "We have to find her before the police do"!!

Up in Es room.. she throws her breakfast on the floor.  She tries to charm Dimitris.

Curtis gets the genetic testing results back today. Marshall, Portia and he are all at GH. Jordan walks about the corner. She wants to talk to Portia in her office. Portia lays into her about wanting to interrupt her and the DNA results. Jordan says she just wants her to know Esme was spotted in town.

Test results are in; Curtis is in the clear. Portia says it's weird he has NO markers tho.

Dex tries to hide in Joss' room as the RA girl tries to get in. Joss was afraid of bedbugs and she was going to check. Joss tells her it's fine. Adam comes around the corner and says "well you SAID you had bedbugs" so he outed her to the RA. She says it's nothing. Then he hears a noise coming from her room. Joss says it's a cat she rescued. He tells her ok, and to put in a good word with Trina for him. Joss goes in and Dex is on the floor. Fever. Joss has to get antibiotics.

Liz gets a voicemail from Jeff, telling her to call him. Carly BARGES into Liz' house.. demanding to talk to her. She wants to know about Esme. She's on her way to tell Josslyn. Oh! BUT She sees Liz with her photos. "Scrapbooking"? Liz says no, just decluttering. Carly grabs a photo: These your parents?  Liz says she hasn't seen them in 25 years before going this past week. Carly tells her not to burn the photos because she might regret it. Liz tells her to leave. She's reevaluating her relationships. Carly goes. Liz lights a match. Then we see CARLY on the porch--SHE STOLE A PHOTO OF JEF AND CAROLYN!!!!!!! OMG! 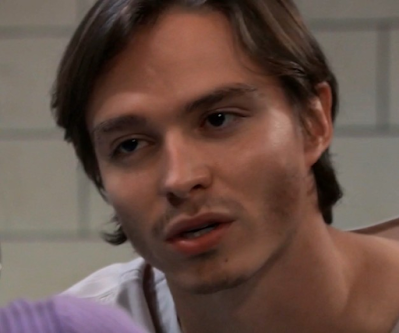 Trina and Spencer at the Jail. Trina talks abut the letter. He says he always believed in her and did what he did to save her.  They talk about him not trusting her to be in on the plan. She's disappointed he didn't believe enough in her to let her know.  Watch the scenes because they were tough to write up! LOL.. basically Trina says she had feelings for Nikolas and he HAD to have known that and he didn't show the same back. He finds out she went to the Comic Con with Rory.

Finn goes to a meeting and Alexis is there. She thinks he needs to tell her what's bothering him. She says he has to talk about what's bothering him. He tells her about Reiko's affair. She says "can't you talk to Elizabeth about all this"?? He says it's complicated. They see Jordan ...Jordan says she didn't know Liz checked herself out of the hospital.. Finn was like WHAT? WHY ? WHAT HAPPENED????????????? AHAHAHAHAHAHA.

Jeff Webber is at GH but Finn sees him first

Elizabeth shows up at Wyndemere

By kdmask - November 14, 2022
Email ThisBlogThis!Share to TwitterShare to FacebookShare to Pinterest