Holly and Robert say goodnight. She's too tired to see Mac and Fe. Robert Leaves. BUT! Holly isn't tired, she sneaks out of her hotel room. 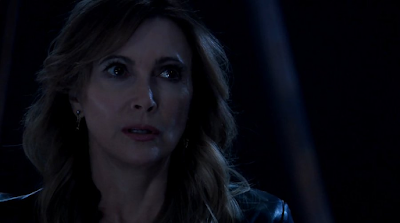 Holly meets Victor on the bridge. He wants to know what Robert is up to. She says finding a judge who will grant bail. He tells her that this whole ruse is better than being his prisoner, right? If she doesn't do it, she'll wind up like Lucy Coe. He also has Ethan. As soon as Anna is in jail, she'll be free of Victor (Or so he says). He threatens to kill whoever he has (I think it's Ethan) unless she does his bidding.

Brook and Chase having a beer. A fan asks for a photo. Brook is so happy. Tells Chase maybe he can be a singer forever. Sad face for Chase. A woman comes in named BLAZE who's going to sing with Chase. Linc comes to the meeting. They see Linc touch Blaze and Blaze is uncomfortable.

Felicia and Mac are watching Maxie's kids. Maxie is stuck at the office because Lucy's been gone and it's a mess. Mac wonders about the DNA test and when the results will be ready. Robert comes over to discuss Anna and how to get her out. Robert says he might check on Holly because he thought she was acting strange.

Maxie, Sasha and Diane are at Deception. Sasha is going to be a partner again. She's clean and ready to go. Diane and Maxie talk about trying to save the company.  Gladys isn't too happy about it all.

Austin talks to Gladys about Brando and Sasha. Mason comes up. They talk alone and it turns out Austin is working for a woman and he's a 'mob doctor' that looks the other way when stitching people up.

Curtis and Portia are in after having dinner at The PC Grille. Curtis is off the Savoy for the night. They talk about him getting gene tested and having kids. Curtis wants 3. The Metro has a cancellation for Valentine's Day 2023 for their wedding. Portia thinks it's too early. Curtis wants to go for it. Portia still thins that it's too soon. Finally they agree that that's an ok time.

Trina freaks out about the killer targeting people from her trial. Carly freaks out because JOSS might be a target LOL . She tells her about the letter. Joss and Trina think Esme must be back doing it. Jordan thinks the girls shouldn't go back to PCU.

Robert goes back to the Metro and finds Holly coming back to her room. She says she went out for a walk, He says she's cold. "You could always warm me up"...they kiss.

Had to leave the last 5 min!! see you tomorrow

By kdmask - November 03, 2022
Email ThisBlogThis!Share to TwitterShare to FacebookShare to Pinterest