Spencer's court appearance isn't going well. He has a public defender who's not doing a good job and even grabbed the wrong folder. Sonny comes in to "help". Esme leaves. Sonny tells Nikolas you don't use children in plans and NOT HIS CHILDREN ESPECIALLY. Yada yada.. he said Spencer messed up by getting caught LOL OKAY? He says he can't bail him out. Tells him Nik is addicted to Ava like his dad was to gambling. Hard to come second to that. Sonny leaves as Nik walks in. Spencer says he won't take the deal that if he accepts Ava and his father's marriage she won't testify against him. Esme is like: YOU crazy? JUST DO IT!

Carly and Willow talking about Nina. Willow is afraid Michael is doing something stupid. Boring. Carly can yell about nina to Willow now.

Austin is at GH checking on a patient and Monica tells him to get lost because he's on suspension. They talk in her office. He says Brook set him up and Monica is the only Sane Quartermain. She agrees.

Maxie goes to the Qs to talk to Brook Lynn. Brook tells everyone her plan for Austin. People argue. Olivia overhears people talking about autism. She's mad, might want a divorce from Ned. Austin comes to the door. He says after his talk with Monica he's going to drop the whole thing and sign the papers to give up his portion.

The PA DA guy comes to the Q door to talk to Michael and the donation he wants to make. 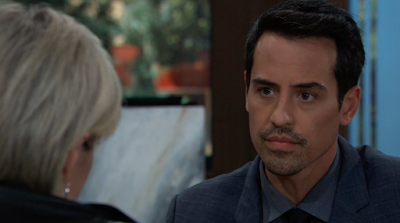 Phyllis and Nina talking over breakfast. Phyllis doesn't want to rebuild the Tan-O without Lenny. Nina wants her to move to PC.

Nikolas and Nina talking over breakfast. Same old Spencer BS. He leaves. Ava goes and sits with Nina and Phyllis. They talk about "Mike" a bit and Ava invites her to see Charlie's (oh I wonder why!!?) AND SONNY WALKS IN!

Sonny and Ava talk about Avery. She wants partial custody, he says no. He says that Ava can see her more under HIS terms. Not the courts.

Austin tells Brook that "this is not over"...

The PA DA and Michael make a deal (off camera)

By kdmask - October 21, 2021
Email ThisBlogThis!Share to TwitterShare to FacebookShare to Pinterest