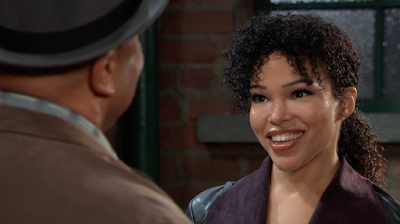 Mystery Guy runs into Portia outside of Kelly's. He has a map, says he's a throwback tourist. In town to see Family. Asks her about the music venue: The Savory. He asks too many questions about the owner. Portia gets suspicious and leaves.

Nina is back from PA already. Bailed out and they took her passport. Ava tells her to hang in there.

New KITCHEN SET for Millow!! Gate house!! WOW, they got some money at GH~~They are arguing about Michael not telling Willow he was having Nina arrested. He says he did it for his family. She says "I thought I was your family" . This is so boring. they are SO BORING

Alexis yells at Nikolas about Hayden..."Did you hire a hitman"? He says I can't believe you asked that. She says that's not an answer. He says leave it be...then says he secured her release! OH Alexis getting out?! HE saw the governor at some fund raiser and asked for a pardon because she exposed that racist judge. Alexis is like "Quid Pro Quo"?? If I drop the Hayden thing, I can get out! She's not having it.

Molly and Shawn come in Kelly's and see Spencer working. Molly says she had to excuse herself from his case (she works at the DA Office). Molly and her father in law talk about law reform. Molly also goes through the Nikolas/Spencer stalking thing.

Gym: Curtis and...TJ. Curtis says that they miss Jordan. Talk about Shawn a bit. Portia comes in. TJ mentions the guy that left the exam room. HE says he asked a lot about Curtis. Portia realizes it's the same guy she ran into.

Sonny gives Avery pancakes. Carly is so happy for moments like these. They say it's Halloween. Avery says someone eats all the Kit Kats. Ava comes in to give Sonny the papers to sign for Charlie's. She drops that Nina bid too. "But I'm sure Carly knows that, you tell her everything" AHAHAHA. Surprisingly Carly doesn't say anything. She's probably saving it all to bitch at Nina.

Jax and Joss talking at the Metro. Joss says it must be hard to watch Nina go through that. Then Jax calls Nina over and Joss yells at her. She leaves. Jax and Nina talk more. He gets on the elevator and Nina turns. Carly is behind her.

By kdmask - October 27, 2021
Email ThisBlogThis!Share to TwitterShare to FacebookShare to Pinterest