Sonny tells Carly Ava was arrested, asks if she did it. She says no, someone in law enforcement must have seen how bad Nina is. Sonny's like "Why would they bother. We helped so many people in Nixon Falls" Carly: WE?????? Sonny dodges the question.

Michael talks to Jax and tells him there are things he can to do help the family.  Then, Jax is interrupted by Scott telling him to get to the courthouse for Nina because she needs friends. Carly and Michael want to go too. Sonny is hesitant.

Gladys gets the whole Deception team to the PC Grille for a "lunch meeting"..something she wants the company to pay for. The other women are @@. I guess this is comic relief? I think she's recording because Sasha takes Gladys away from the table. So Maxie and Brook can talk about Louise/Bailey. AH HA!! Yep, she says she dreads the day that she has to tell Valentin he's not Bailey's father.

PCPD: Nina is yelling, Scotty comes in as her lawyer. "I didn't hire you" she says. "I DID" Says Ava. Scott says it's better she's extradited to PA because it would make her case easier. It would get her bail faster too for some reason. After Scott leaves, Ava talks to her about using the "Mike Love" for leverage. Nina isn't sure. Ava says DO IT!

COURTHOUSE: Ava, Scott..Jax..Nina and then Carly, Sonny and Michael walk in. Carly looks so happy. Nina finds out that Michael had her arrested.

Crete: Britt and Jason didn't find anything in the compound. Jason gets a call from Dante. Meanwhile, Britt is behind the bar looking for booze and the Aussie Guard that was shot comes out, bleeding to take Britt hostage. She wants to doctor him. He's like NO! Come with me. Jason saves her of course. The guy is wounded badly so Britt is going to try to patch him up. 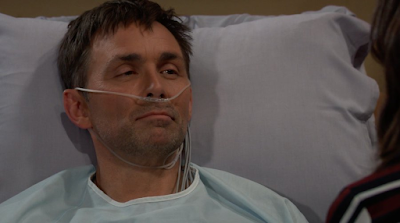 Anna comforts Valentin when he has a nightmare. She tells him to visualize killing Peter. They talk about life..love...kids, yada yada. He calls Brook to talk to Bailey and they are at the PC Grille. She says Bailey isn't there. When Gladys and Sasha go to the ladies room, they repeat that Val isn't Bailey's father. At the end of the lunch, Gladys picks up her phone that recorded the whole thing.

Britt and Jason go off to Cassadine Island...bartender calls Nikolas

Anna and Val go to Port Charles on a medical flight

By kdmask - October 25, 2021
Email ThisBlogThis!Share to TwitterShare to FacebookShare to Pinterest