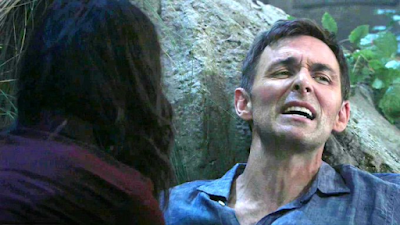 The whole bridge sequence is shown again. Drew over the bridge..Valentin crawls to Anna. Robert goes after Peter who runs. Robert comes back, no Peter damn it. Can't see Drew in the water. Val is bleeding. He's fading, tells Anna to tell his girls about him. He thinks he's going to die.

Dante and Sam get Victor and want him to show them the way to Drew. He says someone else needs to be rescued. Dr O's cell is empty and a needle is on the floor. They say well, she has 10 lives lol. Sam goes off on her own to find Drew. She finds his cell and the word "Scout". Victor is telling them about Drew's conditioning and that Faison had a backdoor to it all.

Portia and Curtis in the Savoy, toasting to the future, that guy is still staring at them. Dun Dun Dun.. Portia tells Curtis about Spencer's arrest and such.

Ava goes and talks to Portia.. they talk about Trina and her liking college and also Spencer.  Portia isn't supportive of Spencer being arrested.

Nik and Ava. She puts her rings back on. They toast their love. Britt and Jason comes in. Britt goes to Ava and Nik's table to talk about the Cassadine family.  She says her mother was taken to Crete. Nik says he knows nothing. She asks to talk to him alone. Britt thinks Spencer might listen to her because he still likes her as a mentor type person. Nik says go ahead and talk to him but he still doesn't think his family owns property in Crete, they sold it years ago. Britt still asks where it is and wants to go there.

Curtis sits with Jason. They talk about the business. Curtis says you know how hard it is to leave but I'm trying. Cut to guy. I think that guy is someone from Curtis' undercover past. Curtis says he forgives Nina. Jason is like do what you want. Geesh, they are kinda snotty to each other.

Mysterious guy asks the bartender about the live music and who books the acts. She points out Curtis.

Anna and Robert go back to the tavern ... Sam and Dante show up with Victor. Victor tells them that Valentin is his son!! Anna's like: DOH!!  He explains the whole affair.  Robert "You'll have to excuse me while I throw up in my mouth over this" AHAHAHHAAHA

Anna calls Britt to give her an update on Liesl. She and Jason are going to Greece.

NIKOLAS calls the BARTENDER in Crete! he's in on all this!! WOW!!

OMG THE END!!!!!!!!!!! Dr. O is in the trunk of a car, drugged. Peter is driving and DREW IS WITH HIM!! He had on a Kevlar Vest and wow.. he's working with Peter!! WOWWWWWWWW didn't see that coming

By kdmask - October 19, 2021
Email ThisBlogThis!Share to TwitterShare to FacebookShare to Pinterest