At Least Robert is on

Valentin is in Drew's cell.  Val tells Drew they are on Crete. Drew tells Valentin that Victor is behind this. Also says Dr O is alive. Valentin tells Drew about Scout; she's a tomboy, likes to climb trees yada yada. The guard comes in and takes Valentin out. 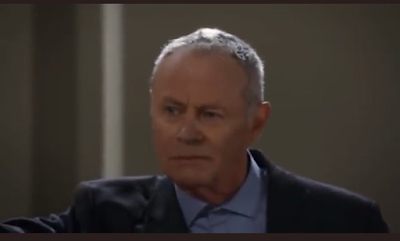 Anna goes to see Chloe...Robert says "How did you beat me here"!! Yeah Robert! She asks why he's there. He's like Um, MAXIE'S BABY..someone has to find her!! It's about time!! He's not happy Anna is working with Valentin. They go in to talk to Chloe.

Peter and Victor. Snooze, whatever. Vic wants the mind mapping stuff to 'trigger' Drew that Faison had.

Dante is in with Dallas and Sam is outside the door with her lock-pick. She comes in. They want Dallas to help them. She tells them she did fake a plane crash for Shiloh. Tells them how. They leave the room. Sam says Drew has been alive this whole time.

SERIOUSLY, if you haven't seen GH in a bit and want a narrative on the whole Drew/Peter/Valentin/ Baby Louise/ Naomi killing... watch today because that's about it.

Drew gets "activated by Peter when he shows him a tarot card HAHAHA. OMG Okay.

By kdmask - October 05, 2021
Email ThisBlogThis!Share to TwitterShare to FacebookShare to Pinterest