Liz and Finn run into each other on the floor of #GH ..they are going to be a team for Trivia Night (remember that? LOL) .. OMG SEE BELOW FOR WHAT HAPPENS WITH LIZ

TJ gets approached by that mystery man. He says he's sick and TJ takes him into an exam room. Guy asks a lot of questions about TJ's life. About Molly. When he graduated...and about his Uncle. TJ says there's nothing wrong. He's going to get another doc to make sure he didn't miss something but the guy disappears.

Maxie and Austin talking outside somewhere. It looks new! Like a woody place but by a plaza?? Huh. Oh it's by the restaurant that Olivia and Ned are in: Port Charles Grille. 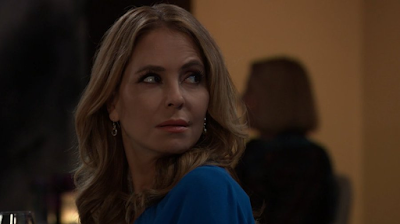 Ned and Olivia out to dinner. He says it's been a YEAR since they were separated. WOW..a YEAR? She tells Ned Dr. Diamond also said that Leo needs to see a neurologist and she's pissed. Says not every kid comes out of the womb like Dante...or all social. Leo might be the creative type. Then Austin and Maxie walk in and Olivia goes off on him. Leaves. Ned says he's sorry. Austin tells him Brook Lynn has filed a complaint. Ned says that's not right and he doesn't agree.

Carly and Sonny. Sonny tells her about the Elijah thing in Nixon Falls, how he helped the town. She wishes she knew "Mike". They kiss and Jason walks in. Jason says they have to talk about the 3 of them. Both he and Carly want to leave the 'past in the past' and Sonny FLASHES BACK TO NINA! Telling her HE LOVES HER!! SQUEE! Jason also says he's leaving for Greece. He tells them all about Dr. O and the whole thing. Sonny is like: Dr O and Scotty are an item? LOL Then BRITT walks in.. Carly @@

Britt tells Terry she's leaving. Terry is like WTF. Then Terry agrees to help and they make nice.

Nina and Curtis are talking at The Savory. Just talking..yada yada. Talk about their "sins' Seems like Curtis thinks he left his behind. I think that mystery guy might take umbrage with that!

Michael and Willow. Willow wonders if Michael can be Nina's boss still. (me : DERP, he's her boss? LOL). Michael thinks they should take Nina to court so she can't see Wiley. Willow thinks that's a bad move. Michael agrees because Nina will just hire a lawyer and fight them. Maybe she'll be too ashamed to see Wiley for awhile.

Terry tells ELIZABETH HER FATHER CALLED ASKING ABOUT HER!! What!!!!!!!!!! He had called when Franco died and Liz never called back. He heard Terry was COS and wanted to find out how Liz was holding up.

Michael makes a contribution to the PA District Attorney's office but wants to talk about a crime there...committed by Nina Reeves? Oh waaaaaaht?

Guy sees TJ and Curtis go out to a midnight movie.

By kdmask - October 20, 2021
Email ThisBlogThis!Share to TwitterShare to FacebookShare to Pinterest