Nikolas isn't happy that Spencer is working at Kelly's...beneath him I guess. They argue about Ava and Nikolas staying with her.

Esme asks Ava to talk outside. She asks for another chance. Ava says she can have ONE and ONLY one.

Willow wants to marry Michael for love, not because they are having a disagreement. They talk a lot about getting married or not. So far, not.

Cyrus wants Sonny to visit him in jail. Sonny's like: NOPE. Hangs up.

Alexis tells Shawn Nikolas' plan to get her out of jail. He's like TAKE IT!! She says they'd have to give up the Hayden investigation. (Who cares? Just lie, Alexis!!) Alexis says she's staying in jail.

Nikolas and Ava see Spencer working. Nikolas: YOU work...HERE??? Nikolas then talks to him about his life and how bad things are. Spencer blames it on Nikolas being 'dead".

Nina and Carly argue about Nelle's death and Sonny..yada yada. Carly says that Nina kidnapped Sonny LOL  Nina says the Fraud charges sound fake and the DA might be making them up to please Michael. She also says Carly must hate not knowing what Sonny did for all that time without her. 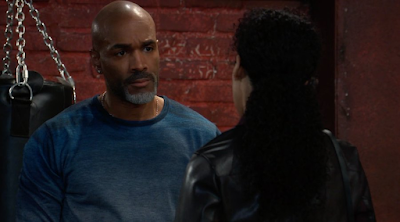 Portia and Curtis talking about Mysterious Guy ... she tells him about running into him at Kelly's. Then Sonny comes in to talk to Curtis. Portia tells Sonny about when Cyrus held she and Trina at gunpoint.

NOT MUCH HAPPENED TODAY

By kdmask - October 28, 2021
Email ThisBlogThis!Share to TwitterShare to FacebookShare to Pinterest