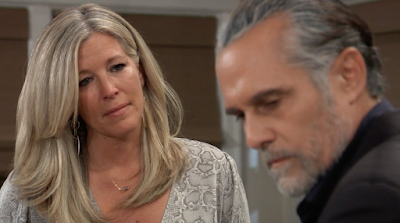 Sonny and Carly. He asks her if she's the same as she was 9 months ago. Then he tells her he talked to Jason about the wedding night. She says yes, they would have slept together if he hadn't come home. "How can I be ok with that" asks Sonny. They talk about her missing him.. yada yada. Carly says they were going to let themselves fall in love. He's very quiet lol..For Sonny that is. He can't wrap his mind around it all; his best friend/brother and his wife. Carly tries to throw Nina under the bus for all this but he's not having it.

Jason goes to see Britt. He has all the personality of a brick wall. GEEBUS. She tells him about her mother. The whole story about going away with Scotty.

Spencer and Ava. She tells him if it was up to his father, the PCPD would throw away the key. She basically says she can help him with his father, get a lawyer and all that but with conditions. We don't hear the condition but Spencer says NO way. Ava says fine..stay here then. Tells him which cell is the best one LOL

Nikolas tells Kevin that it was Spencer that was doing the stalking. Kevin says Laura will be so upset. Nik thinks Spencer is like Ryan and Kevin says no way. Nikolas tells him Spencer had help. Then Esme waltzes in and cries about Spencer being arrested. Kevin says that his behavior was criminal. Nik tells Esme she's lucky she's not locked up too. Esme says that Spencer loves his dad, and he should help him. Nikolas says no. She leaves. Kevin says she's full of it. Kevin says Esme is bad news.

Greece: Dante, Sam..Alexis at the bar looking at the shooting scene. Drew wakes up with a wound. Peter brings Liesl to see him. Drew has a flesh wound from a bullet. He has no idea how he got it. Dr. O and he figure out he lost time before when Helena Cassadine was controlling him. Oh! BINGO!

Robert is going to talk to the Greek musician. Anna, Dante and Sam talk about the whole Drew story. He found out where the compound is and it's owned by Victor Cassadine.

Victor tells Peter he's in trouble. Peter "used" Drew without Victor knowing. Now one of Victor's men is in custody. He's not happy.

Victor has the goons go after Peter

Carly and Sonny choose to build back their marriage

Britt and Jason are going to Greece together

Spencer is going to stay in jail overnight

By kdmask - October 15, 2021
Email ThisBlogThis!Share to TwitterShare to FacebookShare to Pinterest