We see Finn's new apartment. Looks like Silas' old one to me!! Liz and Aiden and Violet are there. Aiden is huge, looks like a different kid. Aiden brought over old photos for Violet to see. She's like "They aren't on the phone"? Oh and old photo of Liz and her dad are in there. Violet wants to meet him. Aiden says they never see him either. Later, Chase comes over with a "Kiss the Cook" apron. Liz stares at the photo of she and her Dad after everyone goes into the kitchen.

Gladys listens to her recording again and hears Maxie says Val isn't the daddy of Bailey. She starts shopping on the net for things and charging them to Brook Lynn. lol

Willow sees Sasha at the PC Grille and wants to talk. She's upset at Michael. "He blindsided me"!  Why didn't he ask my opinion? Yada yada. Trying to stir up some trouble with those 2, I guess.

Michael calls the DA in PA and Carly and Sonny listen. Carly's happy. Sonny is not. Sonny wants to forget about it. Michael finally tells him about 'contributing' to the DA's campaign. 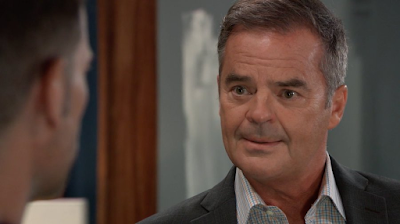 Austin and Ned in Austin's office. Ned wants help from Austin to talk to Olivia about Leo. Austin says he need a marriage counselor. LOL Austin says he'll NEVER forgive Brook Lynn. They go around and around. Austin says HIS father had integrity unlike the rest of the Qs.

Brook meets Chase for a drink at the Metro to celebrate Austin dropping the lawsuit. Retelling the whole Austin story. He thinks she was wrong to do what she did.

Later, Gladys comes in and Brook yells at her after getting a text alert from Wyndams about charges. Gladys is like TOO BAD!! Then she says she recorded her conversation.

At Kelly's... Spencer and Esme talk about Spence's need for a job. He's going to call Britt...he goes outside and Cam comes over to Esme. Then Cam tells Spencer he's assistant manager now and he can use a server. Spencer passes. Esme isn't happy.

Spencer takes the job at Kelly's

Brook listens to Glady's recording of her

By kdmask - October 26, 2021
Email ThisBlogThis!Share to TwitterShare to FacebookShare to Pinterest