OMG today was such a FRIDAY SHOW!! wow!!

Britt tells Scotty that Jason is going to help them with Liesl. Jason tells Scotty he's not going to find Liesl, Scotty is. Oh Scotty was looking up Hungtinton's disease and Jason thinks that he got hacked and someone found out. Spinelli is coming to help. Scotty is like 'DON'T LOOK AT ALL MY STUFF" ahaahhahaa. Spinelli has to look at his browser. Again, Scott isn't happy. Oh Scott responded to a pop up ad about the private plane, that's how he got hacked LOL someone in Russia. Oh and he finds out it's came from Crete.

Curtis and Portia come to the Savoy from a date at the museum. Portia says she saw Aunt Stella. Oh no, Aunt Stella wrote her snail mail and she said she's sorry. Portia and Curtis talk about his family and parents. Curtis' father died suddenly and his mom couldn't get over it. That's when Aunt Stella came in and took care of them. Then, some guy shows up on the bar just looking at them. Must have to do with Stella since they were talking about her? 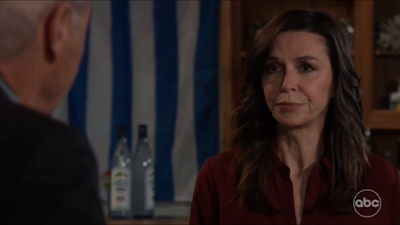 CRETE:
Sante and RnA talk about saving Drew and arresting Peter, Victor et. al..not sure if they know Dr. O is there? Oh Anna won't let Sam and Dante go with them to the compound. She's afraid it will trigger Dante's PTSD and also Sam is a civilian. They leave. Sam and Dante try to get the WSB person to let them go.

Drew and Dr O trying to figure out how to stop Peter from controlling him. She says to concentrate on something that's important to him to thwart the mind-game. He focus' on Scout.

Victor is saying he's going to kill Peter. Peter pleads for his life. Victor tells the guards to kill him. DAMN IT... Peter has the guards on HIS SIDE!!  ALL the guards. Victor is hauled off to a cell. Oh no...just back to his room with Val.

Valentin is in Victor's room, talking to a guard. Oh guard is Australian and his name is Russel. BUT Russel is also controlled by Peter. Peter tells Valentin and Victor he has a plan. Oh WSB STORMED THE GATES!! Peter goes to get Drew and 'activate him' but Drew is ready and says NOT TODAY!!

EXCITING! Anna and Robert find Drew's cell and see "Scout" carved on the wall. Russel keeps Val and Victor hostage..then Drew (Dressed now) bursts in and shoots the guard in the leg!! He says Peter is running for his life. RUSSEL is down!!
Then Sam and Dante find Victor (I guess the WSB agent let them go). Victor is like YOU NEED TO FIND PETER, HE'S THE DANGER HERE!

RnA are on a foggy bridge looking for Peter. Anna says that she won't shoot to kill Peter but Robert says HE will.

Then Drew and Valentin come over the bridge..Robert is like Oh it's just you.. then a shot rings out and Valentin is hit..then Drew gets sub-machine gunned and falls in the water. STUPID PETER DID IT!!!!

By kdmask - October 18, 2021
Email ThisBlogThis!Share to TwitterShare to FacebookShare to Pinterest 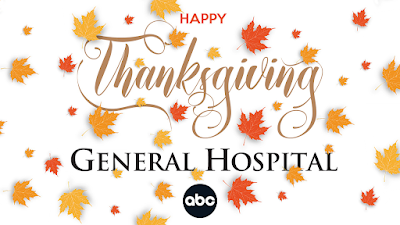