After being such a *itch last week..  I think I'm in a different place now!! It was actually quite a ride. SO much happening at once and the dialog? Off the charts. I feel like I was on a rollercoaster.  That's the point of a soap, right??

The "day" after the wedding lasted Mon-Friday by the way. Yes. Five days. LOL Soap time, what you going to do!

MAXIE FACTOR OF THE WEEK:   First of all, get Moss back, we don't need any stinkin' gardenias. And, yes, Maxie took it upon herself to tell Carly and Joss alllllllll about Nina and Nixon Falls. This baffled me to no end. MAXIE? Why would she spill??? Her reason was "she'd want to know" but come on. Nina knows her biggest secret and she's telling on her? It was just weird. Like, really weird. BUT! Never fear! When Maxie tells Nina what she did, Nina is ok with it. Because you know, why not? Anyway, no one has told Carly about the romance. Heh. Nina thinks Sonny should be the one to do that. 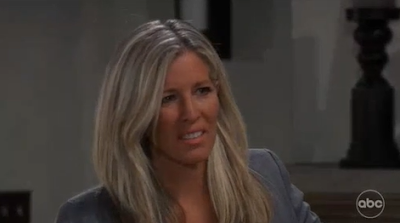 SCREAMIN' MIMI OF THE WEEK:  Oh, who could THAT BE? Let's think!! Here's hoping LW soaked her vocal cords after all of this.  This was one of my fave parts of the entire week. It was almost worth it not to have a giant reveal when Sonny walked in. (ALMOST). Cynthia and Laura were brilliant. I loved Nina's dialog. Thank you for not letting her be all weepy and apologetic. While the reasoning is flawed-- I appreciate that Nina doesn't back down. The part about Nelle being dead and her snapping at Carly for laughing? Ohhhh, so good!! Rarely do people win against Carly's rants because they are irrational and centered around blame. This was complex. Even baffled Carly. When she couldn't get her head around what Nina was saying,  Carly just lunged, only to be caught by her 'person'.   Jason saved Nina's face from scratch marks for sure. It's telling tho; when Carly couldn't deal with what Nina was saying, she resorted to violence. 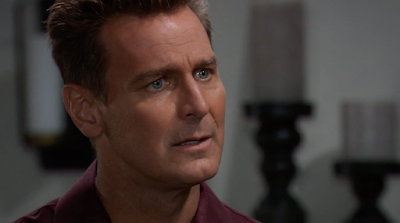 MORE SCREAMING OF THE WEEK: Next up for Carly's wrath? JAX!! If anyone deserves it, he does. That idiot...who couldn't even send out a text alert to everyone to stop the wedding. Plus, I just don't like him so, keep yelling. Jax of course made good points about Sonny, the mob and life. Carly's not listening. Especially when he said Sonny seemed more happy as "Mike". We almost got him telling her about the Nixon Falls Wub Story of MiNa... but time ran out. Josslyn came in and everything took a turn for the nice. 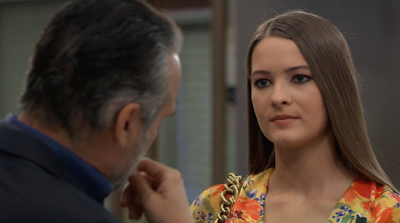 CAPER OF THE WEEK: The other big thing to go down was the whole "Let's get Spencer and Esme to confess" Teen Scene. First of all kudos to all the 'kids' doing the scenes. I'm liking them more and more. NuSpence is terrific at showing brat behavior and vulnerability. Reminds me of a young Genie Francis that way. So.. the kids put a plan in motion to have Spencer think that Ava and Nikolas are leaving for Bora Bora together. Ol' Esme decides to stop them from leaving and tells Sonny that Avery is going with. Of course Sonny goes off the rails and confronts Nikolas at Wyndemere. Nik is thisclose to being beaten to a pulp when Spencer finally confesses to being Ava's stalker. First up... I'm sensing something 'off' with Sonny. Not sure what but--something was just not right. Secondly loved Nik's reaction and yelling at Spencer. Good scenes. Ava walked in at the end of Friday's show so we shall see where all this goes soon! 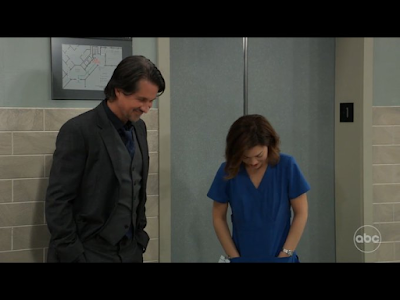 GRADE-SCHOOL OF THE WEEK: Oh my...what WAS that mess with Liz and Finn? It felt like I should have been watching Jake and his new girlie and not two middle-agers !! It seems like since they don't have the freezer caper to talk about anymore, they got nothin'.  It was ok while they were working on Peter-Poison but?? I feel like these 2 'need' people to 'be with'...so stick them together. 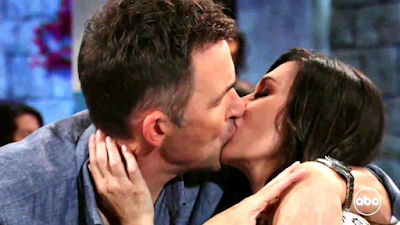 MAKE OUT OF THE WEEK:  Glorious scenes with Vanna. Talking about being a Cassadine...then not being a Cassadine. Helena. Their past.  Great stuff. They were in Greece and drinking Ouzo. Come to find out, Valentin ended up passed out. We saw the shifty musician had a Cassa-Tattoo so was he drugged? Hmmm... 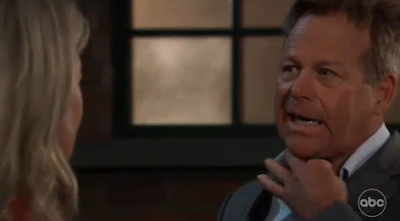 ADVICE OF THE WEEK:  Scotty letting Nina know how the Corinthos handle people they don't like. He's the ONE guy in town we can count on to remember history and all it's glory when it comes to Sonny.  He keeps saying he's going to find Liesl. GO GET HER!! 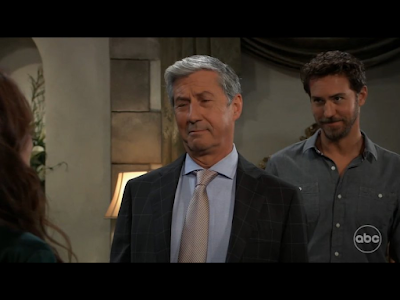 FACE OF THE WEEK: This is NOT a fun face..it's the face that TORTURES WUBSY!! Look at that Peter-Person back there. All smug with my Dr. O. Oh I can't wait until he's killed. That means he'd better be killed. 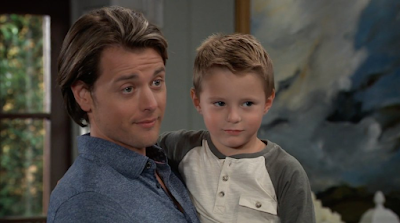 NUFACE-SORA OF THE WEEK: Wiley!! You all grown up! The twins that played him previously are off to France so there is a new set stepping in. He's supposed to be about 2 and this guy seems about 5-6! Ah, it's better if they can talk a bit right? Looks like Chad too! 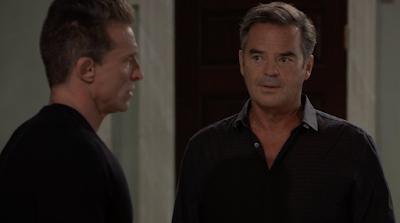 SCENE OF THE WEEK: Oh! Yes!! As @SourceRyan said on Twitter-- this was unexpected yet delightful! Ned telling Jason he needs to watch his P'sandQ's (get it?) because his mother worries about him. Also points out that Jason is a part of the family and Jason says "I know". Squee! I love the Quartermaines and I'm thrilled they are being written for after a lot of years of neglect and killing-off. 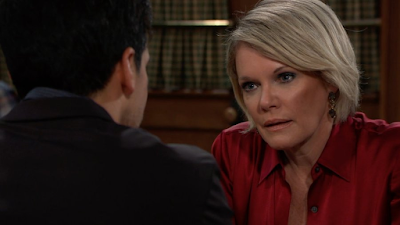 Carly screams at Nina and Jax for not telling sooner

Ned sees more signs of Leo's condition and is concerned

Sonny gets his meds checked out at GH

Jason and Sonny talk about life as gangsters

Peter threatens Liesl; Victor sends her in to medically check up on Drew

Finn and Liz decide to go to Trivia Night together

Austin's case against the Qs is going ahead

Anna and Valentin are in Crete, share a kiss and then Valentin passes out. 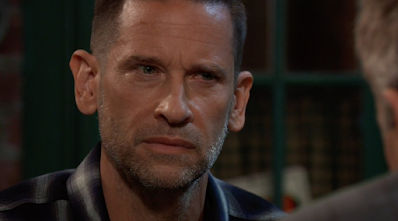 SPOILERS:  CarSon have a heart to heart about Nixon Falls, Dante and Sam adventures next week, Anna visits Chloe and Brook Lyn sees something in Leo that makes her think Austin might be right. All the scoops at Diagnosis Daytime! 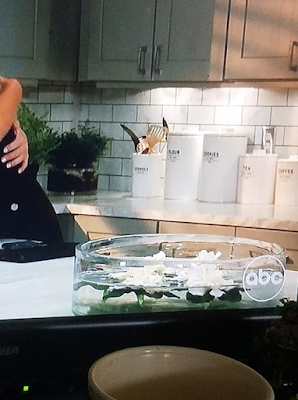 That's a wrap for me!! It's been a heck of a week. YES I did enjoy it. I'm one that reacts to the show only based on story and dialog (not 'ships') so if I'm entertained, I'm happy. The Sonny aftermath is proving to be highly awesome at present.  The show still needs to define Austin better and get things more consistent. I almost wish Maxie would have moved into the Qs for 'protection' because I do like having everyone under one roof. She's way more entertaining that Millow, that's for sure. I would like to see the girl's dorm room as well. Get Chase and Dante working on something for real this time. FREE ALEXIS. FREE BRAD. Get Krissy back bartending. And maybe just maybe when Carly finds out about Nina and "Mike's" love make her run away to Bora Bora for like a month. Ok? 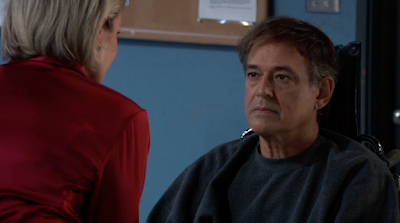 CHEERS!! Did you like this week? What about the stand in Nikolas? He wasn't that bad. Yuri is proving to be fun. Do you think Esme is Ryan's daughter or groupie? Will Victor be Valentin's Daddy-O?   I'll see you tomorrow!

By kdmask - October 03, 2021
Email ThisBlogThis!Share to TwitterShare to FacebookShare to Pinterest