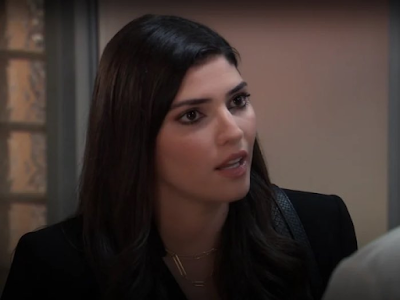 Olivia and Carly. Olivia is surprised Carly isn't raising Crimson's rent since their lease is up. Leo is in the office too. He gives Carly all the expired creamers LOL. Yep. That's real life. He tells Carly her desk is a mess. Then asks for the egg on her desk (it's like a glass egg)... she says sure. Olivia is taking him to the pediatrician.

Sonny and Nina in HER office. He tells her she wont' be happy staying in PC. She says I'm staying. He says we need ground rules. 1. Stay away from my Family 2. we should not cross paths and I can change the rules whenever I want. Nina doesn't back down... and give him the watch. Oh she won't move when he leaves and they have to touch shoulders. THERE IS SUCH CHEM THERE! He starts talking about his throwing the watch. Nina says maybe Lenny had a hand in getting it back. Sonny tears up a bit!! EEK! He says he can't forgive Nina yet...but he's not ruling it out. YOU MUST WATCH THESE SCENES on Hulu or YouTube if you can't live. I can't explain them but part of what Nina says gets Sonny to think back to Jarly's wedding night and seeing them when he opens the door!!!

Britt and Brook Lyn. Brook wants to talk to Britt about Austin and Leo. Brook lets it drop that Austin mentioned TO HER that Leo might be on the spectrum which is a no-no. Britt figures out she told her on purpose to get Austin in trouble. Britt says that Brook can make a complaint to the board. Then she says "If Austin thinks Leo is on the spectrum he probably is"...walks away. Brook turns and OMG OLIVIA IS THERE!! EEK!!

Jason and Austin. Austin says the Qs should share but then again Jason isn't "really a Q". They are at the gym btw. Austin is cracking jokes. Sounds like Todd. Says Jason's honeymoon must have been crowded. Jason doesn't laugh. Lots of Jimmy Lee Holt talk.

Ava and Scotty... he pulled the divorce papers and they are still married. Scotty tells Ava about Nina knowing Sonny was alive. THEN she finds out that his name was Mike there. She figures out that NINA was Mike's girlfriend! LOL She runs out of the bar.

Scotty talks to Britt. Tells her to call Jason for help in finding Dr. O. Britt says NO WAY ..he tells her if her mom matters she will ask him. He finally convinces her to think about it.

Ava goes to Carly!! Not Nina! She wants Avery back. THEN she starts talking about Nina knowing..oh will she spill about "Mike"!!? She totally mind games Carly!! Tells her "Well, Sonny had a whole life in Nixon Falls, just like you had one here"!! Ohhhhh!! She leaves ..Carly calls Jason because she can't find Sonny.

JASON AND SONNY IN SONNY'S OFFICE!! eeeeeeeeeeeeeeeee!!! Sonny mentions Jason and Carly!! TOMORROW He asks him what they would have done if he hadn't come in!!

Austin has to go to Britt's office to talk

By kdmask - October 13, 2021
Email ThisBlogThis!Share to TwitterShare to FacebookShare to Pinterest