Carly wants to be "honest" with Britt about Jason. Says everything she said about Jason was a lie. She just wanted Britt to let go of him. She says that she and Jason were actually happy but Sonny came home. And that's the way it is. She says things should go back to the way they were. Britt says she's not going back to Jason.  She knows now that Jason will always put Carly first no matter what.

Brando visits Sonny. Tells him he's going to be a father. Sonny says Brando can have a warehouse job. Brando says no-- he's out of the business. Sonny wants to know if Sasha is pressuring him. He says not really. He just wants to have his garage up and running. Have a simple life. Sonny says he can appreciate that. I think Sonny likes Brando's idea of a 'simple life' like he had in Nixon Falls.

Sasha (I think with a fake belly?) is in seeing Nina. Sasha understand Nina and about screwing up. She did it to Ava after all. Nina says she's kind to be understanding. Nina says how much she loved Nixon Falls and how happy Sonny was there.

Spencer at Wyndemere. Trina tells him to treat Ava better. They talk alone. She says his apology was weak. She says he scared her so much at the Gallery and never thought about anyone but himself. He says Trina is awesome. She stood up to him. Trina won't believe he's sorry. She leaves. Ava comes back in and tells Spencer it's good to be face to face with her 'enemy'. Ava LAYS into Spencer. He breaks and tells her he still hates her. She's like THERE IT IS...and then says if he tries anything ever again there will be hell to pay like he's never seen before. GREAT SCENE. 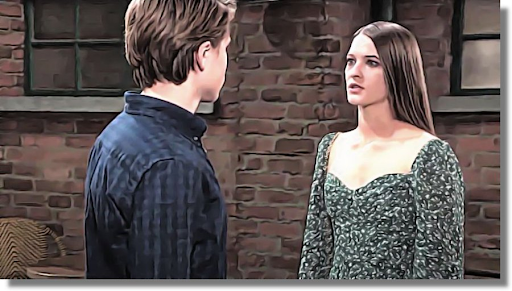 Cam, Joss..Esme. She's "crying" saying Spencer has lost so much. She says they have no home. Joss doesn't care. Esme leaves. Touches Cam's shoulder.... flutters her eyelashes. Joss is like GOOD GRIEF!! Cam's clueless! LOL Joss tells him Esme is after Nik's money. Cameron says Esme has money. She asks how he knows. Joss says she thinks Esme is manipulating Spencer.

Esme gets a phone call. She's interning at Spa Jail where Ryan is. I guess we might see a connection there?

Alexis and Nikolas talk about Spencer. She can't believe he was the stalker but finally says she was wrong and Nikolas was right. It's probably Nikolas' fault anyway. She reminds him that he faked his death for 3 years. Then he said that he threw Spencer out of Wyndemere. Alexis says how stupid that is. She says it's time to parent him. "GROW UP" she says.
Then Shawn comes in and looks weird at Nikolas.

OH Ava called the police on Spencer!! She's having him arrested for stalking her and breaking and entering yada yada LOL

Sonny goes to the bar to talk to Jax

By kdmask - October 11, 2021
Email ThisBlogThis!Share to TwitterShare to FacebookShare to Pinterest