Holly and Luke are at a house in Ireland, looking for Sean. The redhead opening the door..can she be Anna, Tiffany and Sean's daughter? WHY YES! She is!  AND Sean shows up!!  He needs that cure, you'll see.

Sam: "You smell like BBQ sauce"
Alexis: "Music to every woman's ears"
And Derek, aka Julian shows up to be tested. Mac shows up too. Wonder WHO WILL BE THE MATCH!!??
Mac tells Michael Kiki and Morgan are getting married, he runs of to save them. 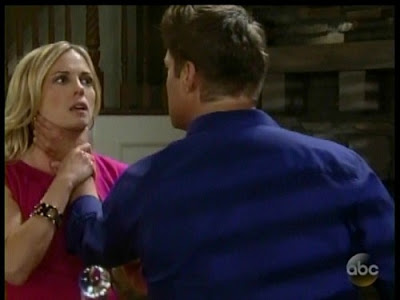 AJ almost managed to strangle Connie...but Sonny shows up with a gun

Sonny clocks AJ on the head with his gun and AJ goes DOWN! BOOM! He threatens Connie..which will no doubt lead to her "Murder Mystery" that's coming. AJ's devastated at the loss of ELQ...he even thinks Monica will be disappointed.

McSlias shows up at the Q house looking for his daugther. Michael's there too. Does Morgan really think if he gets married to Kiki she'll 'stay by him' when she finds out Michael isn't her cousin AND he rushed her??
WTF. HE's sooo stupid.

DID Michael get there in time to stop the wedding? Hmmmmmm

By kdmask - August 09, 2013
Email ThisBlogThis!Share to TwitterShare to FacebookShare to Pinterest