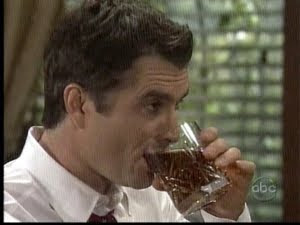 IT'S NATIONAL SCOTCH DAY!!!!!!
OLTL: First of all I swear I thought Blair's boob was going to pop out sideways! LOL...and Todd's yelling is scaring me..geesh!!

GENERAL HOSPITAL: Finally decided to insert the Jax/Skye "story" into the arc. :eyeroll: Robin Christopher is leaving the 29th. Dang it. I doubt we'll see her with the Q's before we go.  BTW, that Fernanda chick would have noticed that Skye's purse was the same. WE NOTICE those things, especially if they are expensive/rare.

Lisa going psycho with Patrick is going to get good!! Nothing beats a good soapy stalker crazy-lady!!

Maxie...LOL with the sex talk that then led us to flashbacks of Michael with Carter. INTERESTING. And she said she slept with Matt today. GEESH she sure did REALLY lay into the sex talk with Michael.

LOVE Sexis,  hate the whole Claire thing...she's just so ...so  "been there done that". "I want a baby"!!????? stupid. stupid. ugh. Sonny says he'll be happy to give it to her...but not with the baby part. Now, if this is part of Claire's plan, ok...if not are we really supposed to believe she wants Sonny's kid after what she's preached?? :thud:

Nikolas tells Liz he loves her-- Mac wakes up. but can he talk on a vent?

EDITING: Sucks--sucks! First the whole Skye/Jax thing is just inserted in there nilly-willy. Then, the Franco thing climaxes and we dont' even SEE JASON AND DANTE at all today!!! This is why I bitch about block taping. Plus the fact Skye had NO scenes with the Q's but we get useless scenes with Claire/Sonny. I think today was just 'insert all the crappola" day.

SPOILERS are up... take a gander. RUSSIAN MOB...ahahahha...the Cassadines had BETTER be in that story. Dang it all and now that Liz gets a baby (Switch or so they say) I am wondering if they are ditching the other whole Italian part of this. :throws up hands: Whateverrrrr. Hit the Rumors too! PLEASE Hit an add because we have MANY charity things coming up. Check back later for a Lisa LoCicero event on a boat!! woot!
By kdmask - July 27, 2010
Email ThisBlogThis!Share to TwitterShare to FacebookShare to Pinterest
Labels: franco, general hospital soap opera