OLTL was good..how fast did they integrate the whole Eli story-- Ford, Hannah and all the stories?? Unlike sticking Keifer's parents in whenever they want, making the whole thing jumpy and not at all entertaining. Just sayin'. I don't know why people aren't watching this show more, it's great. Funny--charming, weaves a great tale. *sigh* David Vickers is the best thing to happen to Daytime in years. Anyone have a Penny Bright doll when they were a kid? (going WAY BACK) Well, Dorian's dress and hair-band was totally in that fashion!! 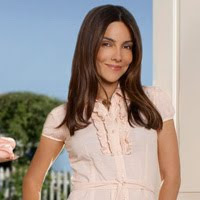 SOAPNET is planning a GIANT BRENDA-FEST in August!
Check it out!! Rumors abound she's going to be a big
face o' fashion this go around. Starting in Milan...hmmm.
~and~
How much is ABC invested in Vanessa's return? They're pre-empting #OLTL and #AMC the day before her return to run 3 hours of Brenda episodes!!!
OH! One of my fave people, Nancy Lee Grahn signed to GH for FOUR more years while I was away on vacation. Yippee!
My own idea: When it comes time for Jason to go back to jail after Franco "dies"... they'll let him out only if he's Dante's partner on the force. HOW'S THAT FOR THINKIN'!! Oh, Bob Guza, you are so missing out on my TALENTS!!

GH TODAY: The long-lost Tracy/Brooke scene aired today!! That was shot WEEKS ago... block taped or edited. Just sayin'. Well worth the wait.
OMG, very boring at the half-way mark. I could have easily napped.
Matt Hunter was on. Quoted Meatloaf:  "You took the words right out of my mouth".... (without the singing)
BOBBIE WAS on!! Bajeebus. They let her hold Ethan's hand and then call Maya over. Heh. Now we won't see her again for another 9 months.
HAAHAHAHA. Krissy's study buddy looks like Keifer! He was so funny about Taylor Swift. ;) He looks like one of my ex's from  way back too--eesh.
LOVED Franco and Blake today--- it was nice. Absinthe, nice touch. It's a wonder he didn't mention the Moulin Rouge though.
HUGE Matt and Maxie chem test today...HUGE.
HELENA WS ON TOO!! and she had on a fabu pin....So many random inserts.  Must have been time to use up the block tape footage they stock up. Today really was a "filler" day, wasn't it?
Lastly, INGO Rademacher (Jax) (@ingorademacher)  was tweeting about his hair this morning. Wondering if he should get a Buzz Cut. He even asked Laura Wright (@lldubs)  (Carly) what she thought. She said NO BUZZ. I told him my close to 7,000 followers wanted NO BUZZ too!! It was fun.  Even his 'real life" wife weighed in (buzz..boo).
By kdmask - July 13, 2010
Email ThisBlogThis!Share to TwitterShare to FacebookShare to Pinterest